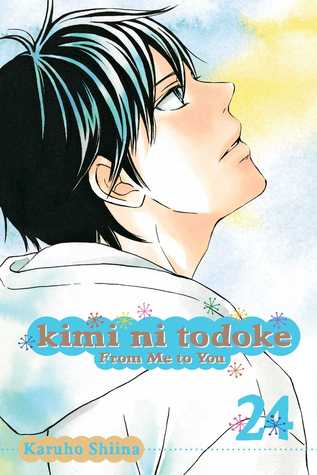 Not a very long review, I just want to put my thoughts out to the world. 😀

This was yet another magnificent volume, though I do wonder how long the series will continue. Sawako is now in her last year, she is preparing (as are her friends) for entrance exams and future things. Maybe the manga will continue later with them in college, but I don’t know, it just feels like the author is tying up the last strings, finishing the last things. Maybe I am wrong, but that is the impression I get from this (and also the last few) volume(s).

Like with the other volumes we see Sawako and Kazehaya, but also Chizu and Ryu, and (YES YES YES) Ayane and Pin. Well, OK the last one is just a hope of mine, but considering the hints that were thrown in this (and also other) volume(s), I am just hoping that they will get together when Ayane graduates. They would just make the perfect couple, they have real chemistry and their moments (though sparingly) are just soooooo cute and sweet (though of course, often Pin just ruins it by doing something, arghhhh. I do hope that it is just Pin being worried about the direction this thing is taking, and not his normal prank-a-lot personality).
Ryu and Chizu’s relationship is really flying, and I am delighted to see it, it took them so long and now they are finally together (though it is still awkward for both).

Of course Sawako and Kazehaya’s relationship, and Sawako’s growth to be more mature is the most important part of the manga, and I do love them together, however it felt a bit weird and off in this one. They are celebrating their 1 year anniversary, and they have a lot of cute moments, but it just feels forced and out of place. It is a shame.

The ending made me afraid for a bit, I won’t say what happened, but Boy I was thinking they were going to do x, but instead something else happened. Thankfully!

I will be eagerly awaiting the next volume, I just hope that we see more romance with Kazehaya and Sawako. (Come on guys you have been together for a year, kiss already or at least kiss more!)