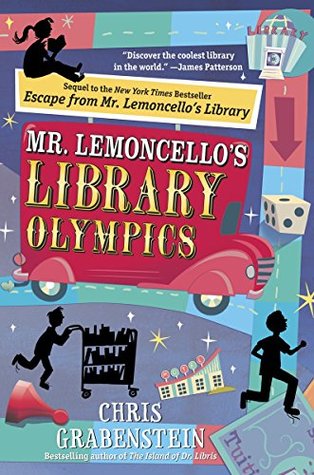 Yes! Yes! I finished it! This was a struggle.

I loved, adored, the previous book. It had riddles, libraries, books, and so much more. This one however had terrible characters, it was boring, I found the way the kids (except for Kyle) knew everything EVERYTHING there was in the world if it was about books/libraries. It just didn’t seem believable. I can imagine a few kids, but all of the kids? No.
I struggled to get through this book, really struggled, and I was delightful when I was done. The ending was a disappointment though.

All in all, I can’t give this more than 1 stars. Because even with crap characters, and a boring olympics, there were still some fun parts.

Here is a list of things I hated and why:
First up characters:
-Let me start with the biggest hate of all:
Marjory.
Marjory, or the girl who just loves stomping on everyone and doesn’t care if she hurts anyone’s feelings. She thinks she is all that, but in fact there are enough things she doesn’t know. Sadly, she keeps on preening, keeps on making harsh remarks, is a total bitch, and so so much more. I hated her guts from the moment she was introduced. And then when she started talking and gaining a bigger role I hated her even more. Dear Lord, this girl needs to get a reality check. Good job, you know a lot, good job you know how to organize, no need to be a bitch about it, OK?
-Second place goes drum roll:
The Chiltington family. Gosh, I already hated them in the previous book, but they really got on my nerve in this one. They were unreasonable, spoiled, and they really had some big screws missing in their heads.
I think I could go on about them, but I just won’t. I don’t want to waste my time on that piece of crap family.
-That librarian from the previous library. Dear Lord, can someone please erase her from the hologram program? She was just so frustrating. Instead of being a fun librarian, all she was doing was being overly paranoid.
-Kyle. He was pretty decent in the previous book, but I totally didn’t like him one bit in this one. He was boring, annoying, a wimp, only cared about winning (and for stupid reasons), was totally a downer, and various other reasons.
-And lastly, I also have to give Mr. Lemoncello himself a place. The stuff he did in this book, how he just threw around his money, it just disgusted me.
And now some story stuff that I didn’t like:
-The olympics. I had expected something more, and also way more book-related, but some games just didn’t seem to do with books, or only in a very roundabout way.
-The whole all the kids magically knew EVERYTHING about the library and every book in existence. *sighs
-The ending.
-What happened to the end of olympics.

All in all, this was a book I was really looking forward too, but now I wish I just hadn’t read it. This book clearly suffers from the second-book-in-a-series-syndrome.