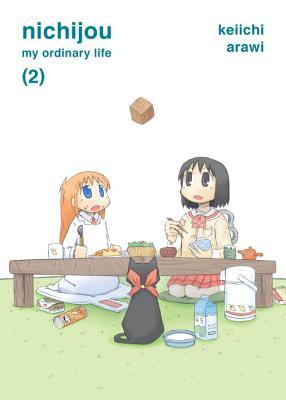 This volume was just so hilarious. I am now in the mood to also re-watch the anime again.

This one still holds no new jokes for me, the anime really did a great job following the manga. However, I still loved seeing the jokes again, and I still laughed. Some jokes worked better in the anime, but it was still nice seeing them again.

In this manga we learn more about Nano (how she has gotten to school, how her first day went, and also again, her asking the professor to remove that key from her back), and we also gain a new character, Sakamoto, or Mr. Sakamoto. He is such a great character and I am delighted to see him in the manga. He always thinks he knows better, but he cannot resist his cat inside. As soon as he spots something that is flying, or moving, or just anything else, he goes in hyper-cat-mode, which is super cute.

Yukko is still a mega-idiot. Really, how that girl got into a high school? I just don’t know. She often doesn’t complete her homework, she day-dreams, she is often found in the hallway for doing whatever silly thing. But, she is also a fun character, and she makes me laugh with what she does. The silly stuff she does, and how she tries her best on doing her jokes? I just love that part.
Also I so could relate to her hunting for those mosquitoes. I might not take it that far, but I am close, especially when they really start getting annoying.

And then we have Mio, Mio who was hiding her drawing skills, but couldn’t hide it any longer. I was laughing so hard when she drew all those hot guys with glasses, but no one could get it. (But I did! Guys + glasses = yes please!)

Then we also got several other characters and I loved seeing them too. Especially the girl who just likes blowing stuff up (then again, he had it coming, all those times).

The art is still pretty decent, and the style really fits with the jokes and how the manga goes.

I just flew through this one, and all I can say is: Volume 3? Please? Now?