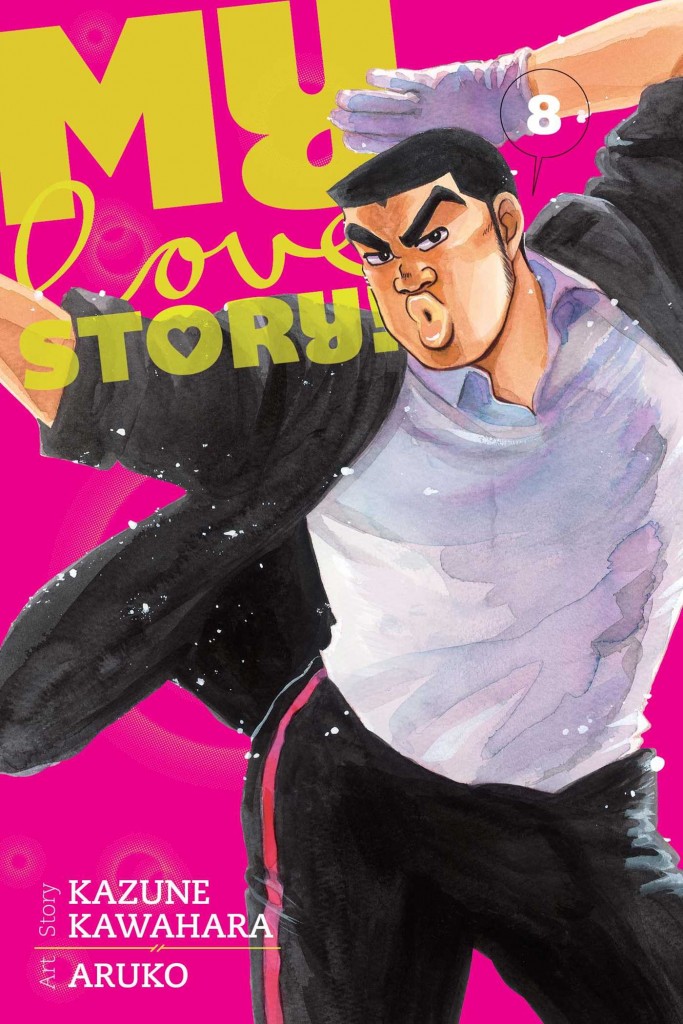 I just love it when we can see time pass in a manga. Some manga don’t do this and make it seem endless, but in this one we can clearly see the characters growing up.

This 8th volume marks the almost-year-point in Yamato and Takeo’s relationship, our 3 characters (Sunakawa included) are switching to a new school year. I loved that Takeo + Sunakawa could be together for another year (which is kind of magical considering that you can get in a new class each year).

This volume has many other things in store for us as well, like an awkward visit for Takeo to meet Yamato’s parents (very awkward and it made me laugh so much how everyone was just trying their best and how there was this weird vibe. Also how Takeo just kept bumping into everything because he was just so huge).
Then we finally have an end point in Sunakawa’s sister and her stalker (sorry, that is just what I would call him, since he does seem to follow her around everywhere) arc/story part. Though I am sure we will see them back again, since they are still such important characters. I didn’t entirely like this part in the manga, mostly because it was just so cringeworthy, and I just don’t like it when guys can’t take the hint and give a girl space.
And lastly we also have Yamato going to do a part-time job. This part wasn’t my favourite in the anime, and it isn’t my favourite in the manga either.
Both parties (Yamato for being so oblivious, the guy for being so egocentric and bleh) are at fault here. Though I do have to say that I don’t blame Yamato for hiding the fact she has a boyfriend. Is that really anyone’s business? If I just started somewhere new I would also not just sprout that around. Maybe later when I know people better, but at the start? No.
Since it wasn’t resolved in this one, I guess the next one will feature this stuff again. I am not looking forward to it.

I also just love seeing Takeo’s sister grow up (though she is doing it quite fast). It was just hilarious to see her react to her name, and then shuffle/flop around fast to get to that person. 😀 Why crawl, when you can just shuffle around? 😛

The art at times failed a bit, especially to characters in the background, their faces often highly awkward and weird.
But other than that, I still love the art and the details that are often present.

There is just one thing I would like to see more, and that is more romance between Takeo + Yamato. I get that they love each other, but I would like more hands being held, maybe some kisses, some form of affection.

But all in all, this was a packed volume with so many things happening. Even with the annoying arc continuing in the next volume, I just can’t wait for that volume to come out.