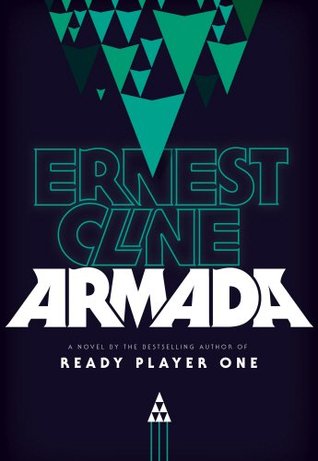 A fantastic book full of references, gaming, aliens, and much much more!

I first read, or I should say tried to read this one, on my e-reader, but this one just suffered the same fate as a lot of my ebooks. I couldn’t get through the book and didn’t like it. Can you imagine how sad I was, because I just adored the other book by this author. Then just a week or so ago I spotted this book (in English) at my library and dived back to the world, and instantly loved it and couldn’t stop reading. It is something that is happening quite often. I try the ebook, don’t like it, but when I get the chance to read the physical version I love the book and can’t stop reading. Maybe something to do with the fact I just miss the smell, the flipping of the pages, but I think most importantly it has to do with my eyes not getting tired. Even on the fanciest e-readers my eyes just get tired superfast. 🙁

Now, let me talk about the book, I don’t want to write a super long review, because spoilers are rampant in this one, but I do want to talk about a few things, and 1 of them really has to go under spoilertags. I know, I didn’t want to discuss stuff with spoilers, but I really need to get that one thing out of my system.

This book is just like the other book, full of references, this time mostly focusing on Science-fiction. Everything from Star Trek to E.T gets referenced, and while I am not a big Sci-fi kind of girl, I still saw most of the references and enjoyed them all. It was great fun deciphering stuff, though I am still amazed that people are able to quote books, movies, or games line by line. Even with my favourite shows? I am not able to do that. I might remember what a movie/book/game is about (for at least some years) but I am not one to remember quotes.

Our MC is a great character and I liked him a whole lot. He was sweet, kind, friendly, but also determined and helpful. It was fun to see him play games, and see him lead whole battles against, well first the computer games, but then later when the aliens turned out to be real, against the aliens. He is a real pro, and I just loved how even though he was afraid in the later parts he kept going, he knew what was at stake and fought hard for Earth. Many 18-year-olds would probably have run away, but he just kept going.
I also loved what he did near the end (when the battle was still going).

There is also a whole slew of characters that were terrific. From our MC’s friends, to his mother, to Lex (I especially loved Lex though, she was such a kick-ass girl, the stuff she did? Amazing! She is a real hero and did many things that helped with the end battle in her own way.).

The aliens, and what they were planning was interesting. I loved the theories, and I also had great fun in figuring out what was going on, because just like our MC, and just like other people I found the behaviour of the aliens quite weird and strange. It just didn’t seem to match.

I first had this book at 5 stars, but upon closer consideration decided to remove -1 star from it because of the ending. Which I will now discuss under spoiler tags.


There were also some small errors in the book. Like for instance when the countdown clock is one hour they all gather together and watch the world being told about the whole alien invasion thing. Quite a chunk of time goes by, but when we get to the next part we are back to the countdown clock, and it is once again at 1 hour. This time the Qcomm link private stuff opens up so they can call their families.
Not only does this not make sense because 1) Time passed to be beyond the 1 hour countdown clock mark.
2) It was said at the beginning there would be NO communication with the civilians (aka the families/friends) until the world knew about the alien invasion.
So yeah, I had to look back and forth to make sure I wasn’t reading things wrong.

But all in all, this was a book that I immensely enjoyed and I just hope that the writer will be writing another book full of references. I would recommend this one to everyone. Even with the suckish ending, there was a lot of action, I cried a few times, the references were awesome, the gaming was great.