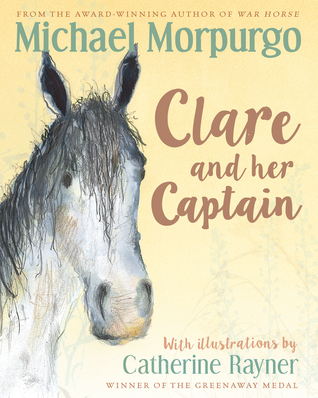 I am not sure what to make of this one.

It was a bit of a weird book, for various reasons.
One it just ended, like that, without anything after it. It felt like the book was missing a part. Oh hey, I solved the problem, and then bam, over. We don’t find out how it will continue for Clare and her mum, or how her dad or aunt Dora is doing.

Number two is about the parents. While it was interesting that it was added (as it helped the story in some weird way), I was disappointed that we will never find out what will happen between the parents. Will they stay together? Or was this their last vacation, the last straw for poor Clare’s mum. Yes, poor mum, because dear Lord, that dad was just terrible against his wife.

The next is the whole getting a new horse thing (not a spoiler, as it was mentioned on the book). It was a bit off, mostly considering it was just crammed at the end it felt hurried/rushed. Which is a shame. I am sure it could have been better if it had been built up better.

Then we have the whole Thatcher Jones thing. Yes, he is a reclusive, but does that really explain all the hate aunt Dora and the dad have? I didn’t think so, so I kept waiting for the surprise. Maybe that Thatcher did something bad in the war, or that he did something wrong in his life. But nothing happened. He is just a reclusive, and that is it.

Clare was a decent character, she sure has her heart in the right place, and I could imagine why she dreaded the vacation so much, but I hope that, with the addition of Thatcher, she will have a lovely vacation, and hopefully is able to meet Thatcher again the next year.

The illustrations were really the highlight of the book. I just loved how everything was drawn.

But all in all, this is a hit/miss book, I had higher expectations of it.