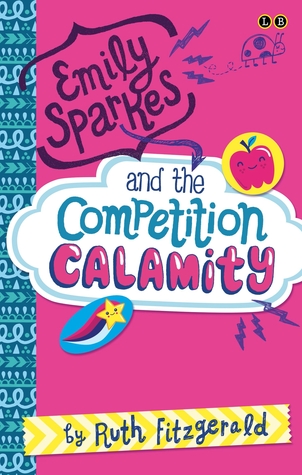 After really enjoying the first book of this series I decided to get book 2. I wanted to know more about Emily, about her friends, and also about her life.

Once again though I had a bit of a problem with the parents. The dad kept putting his stuff in the living room (which is a big no no considering you have 1 baby, sure, she can’t do much now, but can you imagine the danger when she is starting to move around? Do you want your kid to get all those pipes on her head?) and often he was just not really there with his head, the mom was constantly absent. Yes, the mom did an amazing thing at the end for Emily, and also the school project was nice, but I still felt like the parents were lacking. How often didn’t I read that Emily ate the same kind of food over and over again? How many times was Emily searching for clean clothes (especially a school uniform)? How often did Emily come home and find the house in disarray? Too often is the answer on all these things. I can imagine mom, that your baby is taking a lot of time, that you might feel overwhelmed, but you still have another kid who also needs love and a good home.
Add to that a new character, who, without much agreement just takes over Emily’s room. What? So now she has to sleep with her baby sister?
But, I also loved this character, he really was like a real-life Hagrid, and he was also really kind, and tried to make sure that Emily had some nice things to eat, or that she was happy.
I do hope we will see more of him in the next books, it would just be so much fun.

Lucky this book is also full of other things that were a delight. Like being embarrassed because of your mother and the fact she is now working at school. I can just so imagine how she must feel. Life at school is already not the easiest, and when your mom pops up in the most horrendous clothes I can just imagine you want the ground to eat you up. 😀
It was quite fun to see how Emily went about to make sure no one knew that was her mom (of course you can imagine what happens later on though), and to make sure no one knew about the club.
But we also have friendship (not only with a further away friend, but also school friends), a sister relationship that I hope will continue even later when the baby is a bit bigger (I especially loved that Emily went to Clover for advice every time, and I loved how the author wrote the conversations between the two), school project which just sound so much fun and I wouldn’t mind joining, a competition for the best mom and what comes with that (lots of stress, chaos, and even more hilarity to see Emily fly about to make everyone happy, to make her home a bit decent). We also have a runaway rat which makes appearances through the house, and which kind of amazed me that no one noticed anything (well with the exception of Emily and her uncle), as I know rats can really stink (a friend of mine had rats, and they were a bit smelly) and they also have droppings everywhere.

I really loved the competition and also loved that we saw the other finalists. I also had quite a laugh that no one, but Emily and her friends knew the truth about Emily’s mom. That she wasn’t that good. She wasn’t good at cooking (she burned a lot), she wasn’t good at sewing (well at least not the one with cloth), she wasn’t really good at cleaning. It was quite fun to see her friends panic (well especially one of them, the other quickly also found out that there was a lot to do if they wanted to win).
What happened to the competition and who won in the end? Well it was no wonder. 🙂

There were so many other parts that had me laughing, that had me in stitches. It was a delightful book, and the characters are becoming better and better with each passing page. I will be sure to get book 3 soon as I want to know what happens in that one.