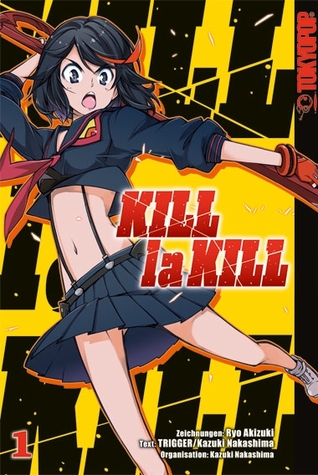 This will be a short review for Volume 1 to 3.

I was curious about this one, would it follow the anime (since both of them got out at the same time) or would it be totally different. Well, for most it follows the anime, but by Volume 2 I knew that there would be several things that would be missing. It was just not possible to stuff all that in one volume, unless you would make that volume a few sizes bigger. 😀

And in the end that came true. The manga stops after the whole who killed Ryuko’s father thing. There is no mention about the life fibers, nor do the teacher and his friend make a big appearance, nor do we find out about Satsuki’s mom, nor do we find out more about Ryuko (those who watched the anime will know what I mean). Instead we have the big battle between Ryuko and the Elite Four, followed by Nui popping up.

It is a bit of a shame, I wouldn’t mind to see all the stuff from the anime in the manga again, but I guess they decided that this was enough, or maybe they didn’t get a chance to continue.

Still it was a delight to see Ryuko again, to see Mako again. (I just love that girl. At times she seems ditzy and not that smart, gets captured often, but you can see that she has wisdom in her, and she is really caring and sweet, and also very dedicated.)

Of course there wasn’t much new things for me in this manga, but it was still a big delight to get back to that world and see old friends. I had quite a lot of laughs about quite a few parts, and I was cheering at other parts.

It took me a bit to read this one, as reading German has gone down since I don’t really read much German stuff, but I hope to read more and thus get my level back up again. 🙂

All in all, I would recommend this manga to everyone. And of course watch the anime as well, as Trigger is truly awesome at making anime. 😀