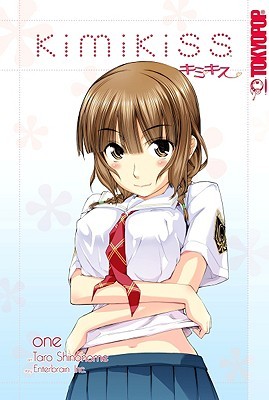 One guy, 5 girls, but this is not a harem since each volume will focus on 1 girl and her story. In the next volume the story/girl is reset again, and it starts over.

This will be a review for Vol.1 to Vol.5. Which is the complete series. Why? Because this one follows the same formula through the whole series. It starts with Aihara in x year of school, he sighs that he has no girlfriend yet > bumps into a girl/girl starts taking interest in him/he comes in contact with a girl/helps her out with something > they start as friends (often with kissing) > they become lovers > the end.

Sure the stories are different, the way he meets the girl or finds out about the girl is different. For instance Mao is his childhood friend, but with Yuumi he meets her in the library. The endings are also different, I won’t spoil anything (like whose endings they are), but we have things from marriage to waiting for each other. It is all really romantic and sweet (though I did find the marriage one to be a bit rushed, these kids are what? 16? 18?).

I think out of these 5 girls Mao and Yuumi are my favourite girls. Mao because she was just so much fun, and Yuumi, well because she is a book girl.
My least favourite would Eriko for a whole lot of reasons. The story with her still turned out to be amazing, and I liked her more as the story continued, but she will never be a girl I will 100% like.

The romance/kissing scenes are fabulous, though I did feel a bit sad that right when stuff started heating up the scene would end. Sure, I am not one to see such scenes (I always feel a bit embarrassed, weirded out, and kind of bad because it does feel like peeking), but now it felt like someone took a scissors to the story and cut out parts because they didn’t agree with it. And that is a shame. I get that they probably couldn’t show those scenes, but I am sure they could have transitioned things better. Now you would have steamy scene > bang next scene (which can be anything from x minutes after to x weeks after).

The romance was done really well. It wasn’t instant love, no, instead it grew. Yes, at times a bit fast, but it still felt realistic and I know I was cheering for our characters.
The male MC was a bit dense at times, but then again, that seems to be standard for harem manga or anime. 😀

The artwork is gorgeous, though at times it was a bit weird that we would go from highly detailed beautiful art to standard manga art. Still I loved the art and was eagerly waiting those gorgeous detailed scenes. This artist sure knows how to draw beautiful faces.
What I also liked is that the girls weren’t all the same. They all had different personalities, but also different bodies.

I also have to give bonus comedy points to our male MC’s sister. I remember her from the anime, and she is just as dedicated to her brother in this manga series. It was quite cute to see her do all sorts of things.

The bonus stories that were featured in 4 of the 5 volumes were really fun, I am glad they added those.

All in all, I really enjoyed this manga, it is a shame it was so short, I wouldn’t have minded more girls. And more stories.

I would recommend this series if you are looking for a fun romance manga.