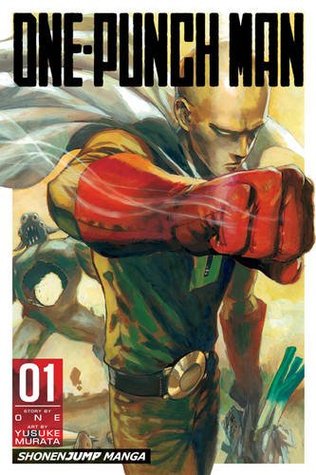 This will be a general review for the first 5 volumes.

Normally I am not one for shounen, the endless battles, the boring training, it is just not for me. Or at least, not any more. I know when I started reading manga/watching anime that I didn’t mind some shounen. Still I wanted to try this manga as I heard a lot about it, and I saw an AMV at the AMV competition at Animecon.

And I am so glad I did try this one out, because while it is shounen, the battles are pretty short (because of our MC), there is almost no training, and it is just so random, and it has such dry humour that I can’t help but fly through this series and love it to bits.

Saitama is just a delightful, silly, wth character who wants to be hero, but totally doesn’t care if the crowd doesn’t like him (though I strongly suspect he does want some love, after all he does save the world on a regular basis). He is at times a bit disappointed that he can fell a baddie with just one punch (which made me laugh).
His dry humour, and at times just silly expressions make me laugh so much. The way he is bluffing through quite a few things is just brilliant (especially when it concerns Genos).
I also love how, mid-battle, he suddenly remembers that he needed to go to the grocery store for special deals. There is a time and place for everything, this is not the time. 😛

I just hope he will get some recognition soon, and not the continuous stuff about him being a fake, or that he is cheating. While it is magical that he can fell a high level monster/threat with one punch, I still would like him to get the recognition he deserves. He certainly doesn’t deserve all the crap he gets. Come on, this guy just saved the world and you treat him like this?

The art is also just hilarious, Saitama often looks so out of place with his silly expressions. Everyone around him is in dead-serious-mode, and then there is Saitama. 😀 Of course even he can go to dead-serious-mode, but more often than not he is just standing there, looking silly/bored.
Even in battles, he just doesn’t take it serious (or at least it seems like that, look at the training (yes, one time we had one) between Genos and Saitama. I just laughed my butt off at how serious Genos was, while Saitama was just frolicking around (and being super-strong)).

As the story continues we meet new villains, new monsters, but also new heroes. Some heroes just make one appearance, but others come back quite a few times.

I also like the idea of a ranking system in the Heroes department, and it is fun to see the stuff they have to do in each of the ranking. For instance C guys have to tackle a monster/baddie each week, otherwise they are kicked out. Which, for a guy like Saitama is quite a bit of stress, especially since his town is so quiet.

The art is terrific and I just love how it goes from serious, to not-serious in just mere seconds. I also really love how Saitama stands out from everything and everyone. You would have a simple drawn Saitama, and then details all around him.

I read these 5 volumes at the Mangakissa at Animecon, but when I got home I immediately ordered book 6 and pre-ordered 7, and I will be getting the other 5 volumes soon. Because I need to know how this one continues, and I will also be checking out the anime, hopefully it is just as good as the manga.

If you are looking for a fun, hilarious, WTH manga, then be sure to check this one out.