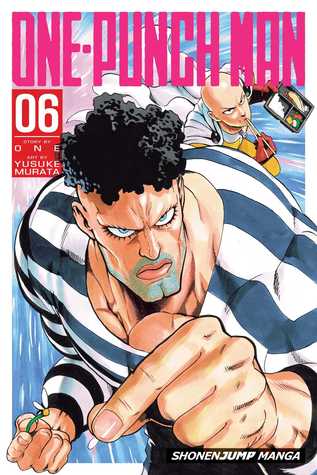 Haha, this was just epic.

I am loving this series more and more. This one had a bit more shounen stuff, but I didn’t mind, as it was mixed with delightful comedy, and funny faces from Saitama.

Though I am a bit bothered I am now up-to-date with this series and now will have to wait until the next book comes out, in July. Tooooo long, especially with that cliffhanger at the end of this volume. I want to know what happens to the aliens, to the heroes, to Saitama. Will they defeat this mega-threat? Or will the earth just be conquered by creepy aliens.

I also love that, while Saitama is Class B, he gets dragged in the meeting with all the S heroes. The looks of those guys when they saw him. Luckily there are some in the S-class that know what Saitama can do, and will defend him if needed. I still think it is a bit strange that Saitama is still B-class. Come on, that guy kills/defeats any monster in one punch, yet he is still class B? He saved so many people, and heroes, but I guess people just don’t like him. Or maybe it is the fact he also has to do a text exam. 😀

I had a laugh when at first there were Wind monsters, only to be replaced by aliens. The way it was done, it just made me laugh. It is parodying the other shounen manga so much with what they did in this one (and also in the other volumes).

Saitama is still my favourite character (his expressions, the things he does), though I have to say that I am loving Puri-Puri-Prisoner more and more with each volume. He is just so hilarious, and the way he acts, I am just rolling off my chair. How he just keeps going back to jail to add guys to his harem. 😀 Also his attack names are also just so fitting for him (Puri-Puri-Prisoner Angel ☆ Style).
I do hope he will be around for a long time to come, I wouldn’t want him to die during the alien encounter.

The art is still super amazing, I just love the details, and boy that maze/alienship 2 page spread? Wow. Just wow.

All in all, I will be eagerly awaiting the next volume, I want to know how this battle continues.

I would highly recommend this series to everyone!