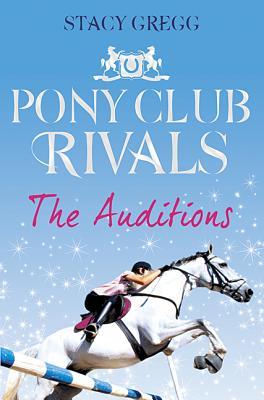 Yep, another series about horses. 🙂 Ever since I found out Canterwood Crest I have been looking around for similar series.

The first part of the book is about the auditions, about our MC fighting for a place in the famous Blainford academy. There are various rounds, and various things that happen. I did love the auditions, but I felt the way time passed was a bit jarring. The auditions take place over several weeks/months, however it all feels like it is just a week of auditions. The school part (which takes place after the auditions) felt better paced, but even there I have to say that there were enough parts that felt hurried, rushed. One moment it is one week, then it is suddenly the next. While there is a mention of time passing, it still felt jarring. It also makes me worried about the other books, will these also run through time at times? Or will it just take it easier?

The auditions were really fun, and I also loved the character we met there. I do hope we will see more of her soon. The auditions were also really exciting, with several harrowing things happening. Walls that need to be jumped over fall over, parents being way to overprotective (really, that woman was just so annoying, finding faults in everything but herself or her daughter). Even though one knows that our MC is going through/will win (because there are 3 other books about her) it was still really exciting and I was rooting for her.

I was also sad for her for what happened after the auditions, but I think she handled it really maturely, I am sure her friend will take care of that, and I am sure she will also send enough photographs and updates. 🙂

There was something that happened around the audition time that I found odd. Georgie’s mom did put money aside for the school, however she didn’t do that for something else that was really important? Did she do it on purpose (to teach her daughter a wise lesson), or did what happen to her cause her to not be able to fund everything in time? It is something we probably will never find out, though I would love to know.

The Blainford school was a fun one, though I found it a bit weird that they would teach both German and French. Don’t get me wrong, it is normal to do that in my country (with the addition of English and of course Dutch), but it seems odd that they do that in a US school. I know that there are a lot of international people there, but it is the first time that I read about a boarding school in the US also teaching German. Normally it is just French.
The other lessons were also fun, and I had a small laugh at the fact that our MC finds out the harsh way that such a school is not just fun and play, but also focusses a lot on academic. Which means she will have to work hard if she wants to succeed.

I am also delighted with the addition of boys, and also the romance was really fun and cute. I can’t wait to see how that will continue in the next books.

Of course, as expected, we have the mean girl trope. This time we have 2 mean girls. Kennedy and Daisy. I am not entirely sure who I dislike more, for now it seems to be a tie. Kennedy is just a rich girl who thinks she is better, and Daisy… well is Daisy, she is super competitive and while that isn’t that bad on itself, the way Daisy thinks she is so superior is just bleh.
But I am used to it by now, it seems horse books just need to have mean girls in them. I did hear from an author (of another horse book) that it seems this is also happening in real life in stables. So I can imagine why it is added. Still, it is a trope I would rather not see used that much.

Of course this being a horse book, there is a lot of horse stuff, and also various kinds. Unlike others this one shows us a lot of sides to horse riding. Not only riding, but also caring for your horse, western style riding, and many more. I loved that this was added, it really gave the book extra dimension, and I just can’t wait until the next book and see what we will get then.

Tara was also a surprise. Sure, through her POV (yes, she also has some parts) you could see she is pretty nice, but the way she acts is quite the opposite. I can imagine why though, because as you read the book you can see why she acting like this. Still I wouldn’t mind seeing more of Tara’s kinder side.

All in all, this book was wonderful, and I also bought book 2, which I hope will be delivered soon. I would recommend this book to everyone looking for a fun horse book, or looking for a boarding school story (even if it doesn’t start until quite a bit in the book).