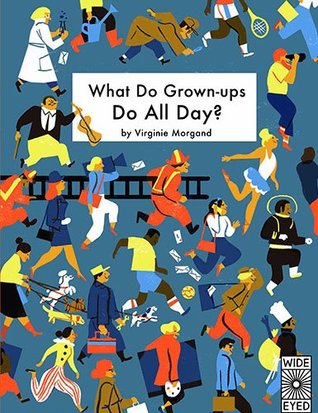 When I saw this book I knew I just had to have it, I saw excerpts/sneak peeks of it on Twitter and fell in love with the book. It finally came in 3 days ago, and yesterday I had a chance to read it.

This is a really fun, terrific book. Separated in various workplaces, from hospitals to theatres, you will see 8 people in each workplace and learn about their job, what the name of their job is, and also a short description of it. I really loved this, though at times I thought it was a bit too generalizing. I can imagine that they had to do it because otherwise the book would become too big but still I wished they had done it a bit differently.

There was however one thing that confused me, one thing that stood out and was weird. This book is about jobs, about workplaces, about what grown-ups do at such places. However, there were a few people who didn’t do a job, unless these days those are jobs (in that case, I am all up for those). Things like a woman who is a shopper (just doing groceries), or a lady from the audience (in the theatre). Those are not jobs, and I think it is just odd that the author decided to add those. I can imagine it might be fun to add them and show that there is more to the workplaces than just work, but then don’t promote the book as a book for kids to find out what they want to become later. Don’t promote the book as being all about workplaces and jobs then.

The art was pretty awesome, though I (and this is not racist) wish they would have used a bit of a lighter colour for the people who were dark-coloured. Saying this as a style thing, I loved seeing the faces (since they had some nice expressions) of the characters, and the black and brown colours just ate each other and made it hard to see the character. It just became a bit of a blob, and that is a shame. I was delighted to see that they were doing characters in all colours (and shapes and also not letting gender determine the job), but I think this one should have been thought out more.
Other than that I can only have high praise for the art. Especially the big pictures before the jobs, those were just a delight. I loved the details, the colours, and the way the art was done.

All in all this was a terrific book and I am sure that kids will love this one a lot. It might confuse them, since not all characters do a job, but I am sure parents (or teachers) can explain. 🙂 I would recommend this book to everyone.