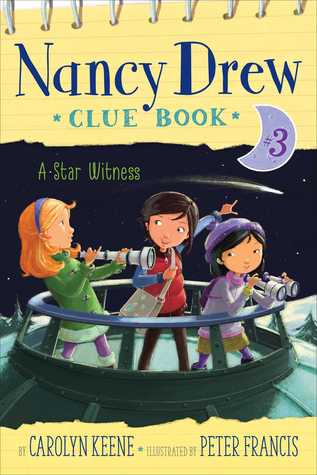 The third Clue Book mystery and it was a really fun one. Especially considering where it took place.

Namely a planetarium, where George is going with her club, and she invited Nancy and Bess as her special guests. Planetariums are just so much fun, though I do wish I could go to the Riverheights Planetarium as it sounds so much cooler than anything I have seen here. With fun expositions with interactive things to do (which is fun for every age), but also with shows and much more.

Add mysteries + planetarium together and you got a book that is instant love to me. Though I have to say I was quite disappointed with the culprit. Oh no, not because I couldn’t figure out who was the culprit, but more that I was disappointed in the lack of responsibility and ethic of that person. Why the hell did you think this was a good idea? I do hope this person has learned a lesson and won’t do this kind of thing again.

The mystery was really fun, it wasn’t clear who it was until they showed footage of the person, and also gave some characteristics, then I knew it just had to be that person. Until then? I had fun puzzling it out, running along with Nancy and her friends, finding every clue, and talking to every person there was.

I was a bit disappointed in the illustrations. They just didn’t make sense at times. Stuff was either bigger or way smaller than one would expect, or would make sense. Nancy’s clue book is so big she can barely hold it, let alone write normally in it.

But all in all, I did enjoy this book a lot and I will be going to read book 4 next. And then it is waiting for the next book to come out.