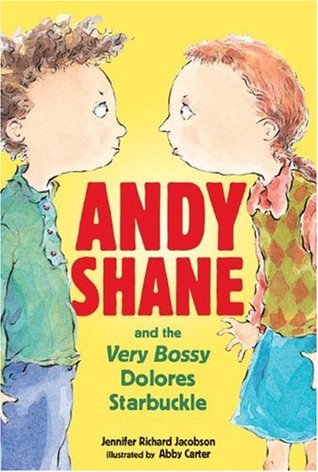 This is a review for book 1 to 6. The books are quite short so I thought I would do one review, especially since I binge-read this series (yes, I started with one, liked it, and just continued on to the next and the next and so on).

The books are about Andy Shane, about his life at school, at home. He apparently lives with his Granny (though I kind of forgot already if she was really his grandmother or not, and I also still wonder where his real parents are, which never really got mentioned in any of the books up to now, maybe a new book will give some enlightenment on it, it would be really nice). We see Andy go through various seasons, see him talk and make friends to various kids (including a very annoying girl).

I really liked Andy, though I wish he was a bit braver. He often (tried) to run away or not do something, I would also like to see the teacher help him in class (since he seems to just go silent when someone pays attention to him or asks him something).
But he was a fun kid, and I liked how nice he was to people.

Dolores was the only character that I absolutely disliked. Even when we get through the cringey first book with her awful personality and we get to know her a bit better, I still never liked her once in the entire series. She is a terrible girl, always wanting attention, won’t shy away from tattling on someone, or making them feel inferior. She just doesn’t seem to get the hint either and will draw conclusions from the most stupid things.

Lark was a really fun character and I was instantly liking her. She was sweet, cool, and friendly. She didn’t treat Andy bad, she just immediately saw him as a friend. I was delighted that she was introduced and added to the books. We could use a good character who is friendly, kind and lovely to Andy.

The book is also full of gorgeous illustrations (yes, gorgeous, they are really beautiful). I had a lot of fun looking at them and they enhanced the story some more.

All in all, I would highly recommend this series to everyone. Looking for a fun, snack-sized read? Then try this one!