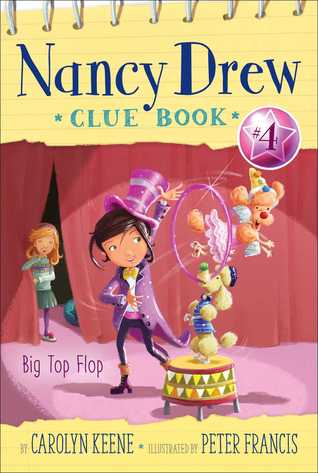 The fourth book, and also the last one in my boxset. While I did like it, there were things I just didn’t like.

For instance how the circus treated George when her whistle didn’t blow. They didn’t give her a second chance immediately after, they laughed at her, made fun, didn’t even try to help her out. I think that is really immature, and also pretty rude. If it was a kid’s circus I might have forgiven them, because kids can act like this at times, but a circus full of adults? No. Just no. So instead of enjoying the book and the whodunnit, I was mostly frustrated at the adults.

Of course the whodunnit was also fun, but I do have to say I was really disappointed with the outcome and what had happened. I had expected something grand and exciting, but it turned out to be that. Bah.

Miles was also just way to annoying and cocky. I hated how he acted, and also near the end what he did there. That is just a no-no.

But even with all those points, I did like the book and the circus. It is an old-fashioned circus, one you sadly won’t see any more. With animals of all sizes and sorts. Sadly, these days that just isn’t allowed any more. I am so glad that when I was a kid circuses still had animals, it just made things way more fun, and the animals were often still well taken care of (sure, I know the stories, there were enough circuses not taking care of their animals, but still I am sad that every animal had to leave).

I did like that we saw Nancy’s dad, and also Hannah. They are great characters, and I love how Nancy’s dad is so supportive of what she does, and wants to do. Even providing with tips and hints.

I did like the illustrations, though again the proportions of humans, but also objects is something that the artist needs to think about.

I do hope the next book will be better again.