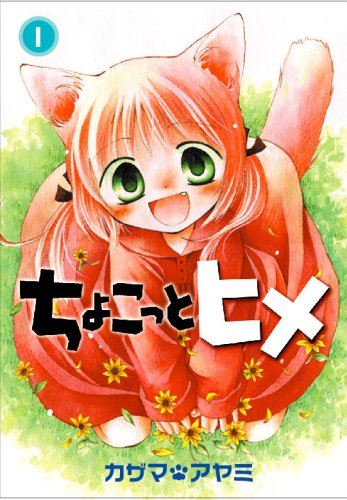 When I saw the cover I just knew I had to try it out, though I have to say I didn’t expect the story that happened.

What I thought we would have is little girls with cat-characteristics. But actually that is just what the cat themselves see (and also the dogs it seems, or at least some of them). Humans see them as cats/dogs. So it was quite confusing as you would see them in cat-mode, but also in their illusion(as I would call it)-mode. I think it would have been better had the mangaka decided on one form.

Still the manga was highly adorable, and it reminded me of Chii’s Sweet Home, especially with how everything is so new to Hime. She is figuring out things as the manga goes on. From finding out what a kotatsu is, to learning how to behave at home (so no scratching, no peeing on stuff, etc.). It was really fun to see her become more familiar with her life at the main guy’s home. And also to see her make friends. Her biggest friends at the moment are a puppy named Cookie, and a cat named Shiroko.

It was such a delight to see the three of them together. They sure make a lovely group of friends, though they are quite a force to be reckoned with.

I do have to say that I didn’t like the owner of Shiroko. The things he did? The bullying, the pain, and several other things. That is not how you handle your cat. That is just animal abuse. It is a shame that is added with lots of humour, as if bullying your cat is so fun. It is not. Believe me.

The art is lovely, adorable, and it fits the manga so perfectly!

I will definitely keep an eye on this one and continue reading it. I would also highly recommend it to everyone in need of an adorable manga + those who love cats. 🙂