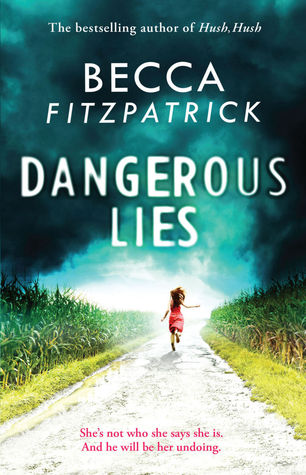 Even though there were still a few things that I didn’t entirely like (like Trigger, though now with the ending, he did make a perfect villain so I got to give points for that), and I still had one question (where is Reed??), but in overall I just can’t give this book less than 5+ stars. I have been having troubles with reading stuff lately, and this one just grabbed me and held me. I couldn’t stop reading (even if at times I really had to).

Not a terribly long review, just a short(ish) one to express my feelings on this book.

When I spotted this one at the library I knew I just had to get it, I did quite like Becca Fitzpatrick’s other thriller book, though I never could get into her paranormal books. And in the end I loved this one even more than I did the other thriller book. Sure, it had some moments that I just wanted to tape our MC behind several layers of wallpaper, but in the end I just adored this girl, and she was my favourite.

Yes, the MC was quite annoying at the beginning. When we first see her I thought she came from a bad home, and was poor, but as soon as she gets to her new place she starts acting all high and mighty, dismissing several things because of how cheap they are, of how they look. Apparently mommy could still afford a big house with lots of clothes and such. And our MC missed all that. Hoo boy, I was worried our MC would be like this all the book, but thankfully no. I can’t say much more as that would give too much away, but I loved how this girl changed. Even if the time span of the book was quite short (it all takes place in just over a month, maybe a bit more), it still felt natural.

Her relationship with Chet, that was a bit weird to me. Later it became more natural, but it took me several cringey moments, and several moments that I wanted to shout at our MC, before I liked it. I was mostly just angry with the MC for how she acted around Chet, you know darn well that wasn’t friendship, that it wasn’t that from the start (this is no spoiler, just read the book, and you will see that as soon as these 2 properly meet (I don’t count the lawn-mowing part as an encounter) there will be sparks flying.
Of course I can’t spoil much, but I can say that I loved how it developed. I was cheering for them both, and I was squeeing when things did happen.

Then we have the big secret that the MC is keeping, I have to say I had no clue what it could be, yes, I had some options, but I never expected that option to be a possibility. Wow. I can imagine she did what she did though.

Then we have a dickface (sorry I already forgot his name, he was just such a pest that I didn’t care to even remember his name) who keeps ruining the lives of every female he encounters. 😐 I really despised him, and I also hated how everyone in town was protecting him for various reasons. 😐
I don’t want to talk longer about this character. He was a jerk, and well…. for what happens in the end….

The mother was just terrible btw. Especially when she does x things.

Carmina took a long time to get used to. Really, a long time. Sure, Stella was a bit over-the-top, but I did get tired of Carmina’s preachiness.
Later on however, we did see a different side to her, and we also learn more about her past, which made me care for her more and more. She is still not my favourite character, but thankfully she changed and became better.

There was one thing that I was curious about (which I also said in the introduction part). What happened to Reed? We hear that stuff happened, but I don’t believe I have seen anything of a continuation about that part. Is he dead? Is he semi-dead? Is he somewhere else?

But all in all, I can’t help but loving this book. I was in a bit of a reading slump, and this one picked me up and just lifted me out of it. Thanks book! <3 <3 The setting was fun, there were a lot of parts that had me thinking, there were lots of fun summer moments.
The only thing that I would have liked to have seen would be an epilogue.