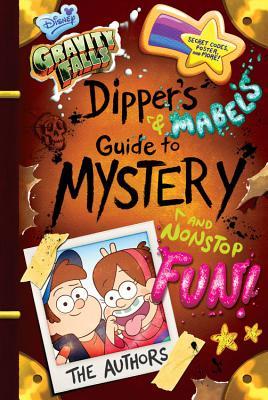 So about 15 days ago I discovered Gravity Falls.

Someone posted fanart on Twitter, and I was instantly interested. Of course I had no clue what Gravity Falls was then, but someone there was more than happy to help me out with all my questions. And then I started watching it and I was a goner. The show was just too awesome, and I am even thinking of re-watching them again. Until that time comes though I decided to also get all the books that are around about the series. From the Choose your own adventure (waiting for that one to arrive) to Journal 3 (waiting for that to come out). I wish there were more books out about Gravity Falls (books like this one, but also new stories, there are enough monsters mentioned in that (and the other) journal(s).

This book was just a delight, it is mostly from the POV of Dipper and Mabel, you can clearly see who is writing at the moment due to the way they write, but also due to the colours used. Mabel using sparkles and pink, Dipper going for more serious black. The text are also so different. Whereas Dipper talks about the supernatural stuff, codes, and other serious stuff, Mabel is more for fun, fun, and more fun. With her you will learn about sweaters, about boys, about sleepovers, and more! At times Mabel comes inbetween of Dipper’s text and I just loved when that happened. It was just like I was there with them, seeing them standing in front of me, and talking to me first one, then the other.

The whole book felt like that, the pacing was great, but it just felt like I was there with the characters wherever they were. Inside the Mystery Shack, and outside of it. Sure, this isn’t the first time it happens with me and books, it happens quite often, but often it is just watching from outside, it is not often that I can actually visualise myself standing next to the characters and following them. Maybe it is because I know how everything looks in the Mystery Shack and beyond. That I know how the characters react/move/do stuff. Often with books you still have to create the world, here the world is already set in place.

We also get POV from the other characters. Soos, Wendy, Grunkle Stan, and even Gideon and Bill (urgh to both). They each have something to tell, and it was just so much fun that they were included in this book. Of course, I would have loved it already if Dipper and Mabel were the only ones, but this? This makes it even better.

The book is really fun, and also interactive. There are codes to solve, puzzles to be made, things to do. Even though of course I just had to write stuff down somewhere else, because no, no, just no to scribbling in a book (unless of course it is an activity book, though even there I find it hard to do).

All in all, this is one book I would highly recommend to all Gravity Falls fans. Be sure to only read it when you watched it, as there are some spoilers for at least the first season.