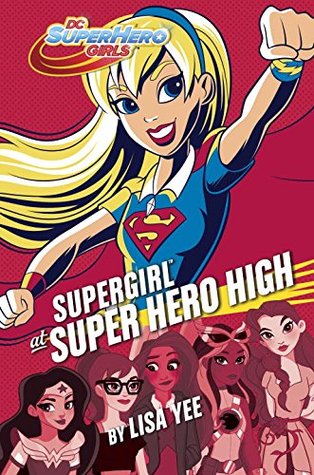 The second book in the DC Super Hero Girls and this time our main lead girl is Supergirl.

I was really eager to read this one, Supergirl is just amazing, and I couldn’t wait to see her in this version.

The book starts off with before-Super Hero High, it all starts with Supergirl’s/Kara’s planet exploding, and her losing her parents. She is shot off to Earth, only due to some stuff she doesn’t arrive the same time as someone else does. It was fun to see where she landed, and to see the Kent family (and thus Superman) as well.

I felt sorry for Kara, that poor girl, not only did she lose her parents, and her parents, but she also has to pick a school, because her superpowers have popped up, and she needs to be able to handle those. No one likes to pick a school when they are still not used to everything that is going on. I was glad for her decision though, but I can also imagine the struggle she goes through in this book. How she at times doesn’t feel home at Super Hero High, how she struggles with her powers, maintaining them, and also trying to control them as they grow.
I was happy for her though that she was able to make friends, even when stuff happened that wasn’t fun, she had some people who cared about her, who helped her out, who talked to her. The biggest friend she made would be Barbara, or Babs.

I still don’t like Cheetah, Frost, and a few other characters. I can’t see how they can still go through with school considering their attitudes and the things they do. 🙁

I also had a slight problem with Supergirl herself. Namely the fact that each time she would do something awesome, she would get distracted because OMG Attention! She got way too quickly distracted, and I was just annoyed by it all. I can imagine all the attention is fun, but she kept doing it and in the end destroying stuff left and right. And of course, the poor cough dear felt all sorry then and was being depressed. Yes, gee, how come. You did a stupid thing, and you think everyone will be happy?

The battle, and the mystery surrounding stuff before everything happened, was a delight. I just had so much fun cheering for our superheroes, but I also had fun trying to figure out who was behind it all. At first I didn’t have a clue, sure, I had some suspects, but it wasn’t until a certain moment, that I knew who it could be. I am sure it took everyone by surprise, especially those in the book. I felt sorry for Supergirl. 🙁
The battle was amazing, and I am glad to see the way it ended.

All in all, I am still loving this series a lot. So many characters that I recognise, and it is fun to see them as teenagers and trying to get through school and make friends.

Also the school is just so much fun, even if it is hard, I wouldn’t mind going to it if I had superpowers.

The next book is all about Batgirl, and I am really, really excited about that one!

I would recommend this book, and also this series to everyone.