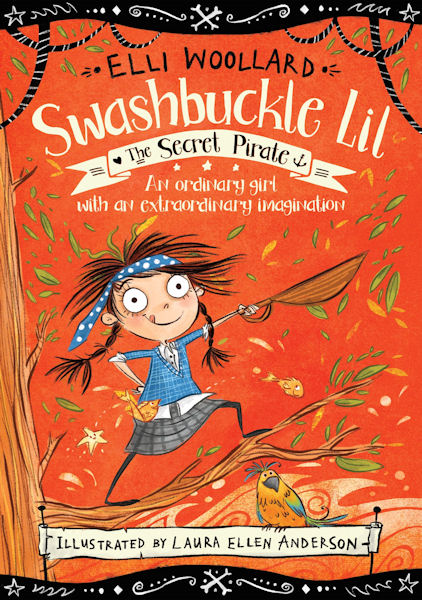 I spotted this one on one of my friends twitterfeeds, and I just instantly fell in love. One of my favourite illustrators? A book about a girl who is a pirate? This all sounded perfect!

And now after reading it I can tell you that I love Lil. She is an amazing kid, and just such a delight. Though I do have my questions if she is really a pirate, or if she is just play-acting. Don’t get me wrong, there are a lot of instances that she could be one. But there are also enough instances that made me wonder. No one ever sees the baddies. No one but Lil (and her parrot). So I was kind of expecting some twist to this book, but none came.
So I am guessing Lil is truly a pirate, which makes me curious as to why she is at school now? Did her parents send her there? Or whoever cares for her in the pirate world?

The book is split up in two stories, both connected, so both were great fun to read. In the first we have the big bad pirate who is making a stink at Lil’s school, and in the second one, during a field trip, we meet with stinky pirate’s pet crocodile, and of course also with the stinky pirate himself. It was such a delight to see what Lil did to make sure no harm came to her friends/classmates. Sure, she knew she probably wouldn’t get a compliment, and she knew she probably would get in trouble, but she still did it. applauds for Lil
The stories were really great, and I enjoyed them a lot. I was also happy with the endings for each of them.

The book is also in rhyme, which was such a delight when I found out. Yes, at first I didn’t notice it, but then I started saying things aloud, and voilà rhyme! After that I noticed it all the time, and I had fun reading them. It really works well with this story. Normally it might get a bit redundant with longer stories, but not in this one.

The book is dotted with the lovely illustrations of Laura Ellen Anderson, it was such a delight to see her art again.

And I noticed that at the end there was mention of a new book about Lil coming soon. So guess who fangirled and squealed? Yep, that is right, that would be me. 😀

I would highly recommend this book to everyone, Lil will quickly become your favourite pirate.