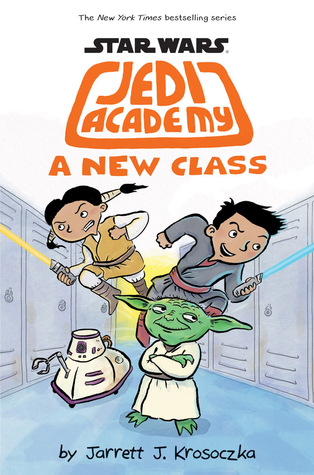 I was so sad when Star Wars Jedi Academy ended (then again, I could imagine why, because that character’s life at the academy was over), and then I heard that someone else would pick it up again. Of course I was worried, but on the other hand I just needed this in my life.

And I have to say that Jarrett J. Korsoczka did a magnificent job on making a new book in this series. The feeling is the same, the setting is perfectly kept, it just has new students, and a new story, a new year at our favourite school. Wonderful!

One of the two reasons why I haven’t rated this one a 5 stars was because of Victor. I just didn’t like how he acted at times, towards his sister, but also towards that kid in black robes, Artemis (which sorry, I would almost call bullying). Later on he becomes much much better, you can finally see him find out his place, see him make better friends, find out stuff about life.
At the end of the book he really made a great character, and I wouldn’t mind another book about this kid.

Yes, Victor has really grown a lot. From an insecure kid, who picked the wrong friends, he turned to a nice person who is caring, friendly, and who doesn’t stress out too much about school (as he did in the beginning, I wish he had just gone to a teacher and talked to it).

He also showed courage near the end, and you could see how much the school has taught him. It gave him a place to call home (the Drama Club).

The other reason were the comics included in the newspapers, they were just blatant rip-offs from Peanuts and Garfield (and maybe another one). At first I liked it, but then after one of them I just shook my head. I much prefer original comics than a bad rip-off. Don’t get me wrong, I love a tribute, but this was just a copy-and-paste with Star Wars characters.

I loved all the various other characters (well, with the exception of 2 characters, one the mean guy (I just knew he was mean from the start, how Victor couldn’t have seen it, I don’t know), and the girl Victor is swooning over, sorry, I just didn’t like her attitude, sure Victor is a bit stalkerish, but she was just an ice queen). My 2 favourite characters from the side-cast would be Victor’s sister (she might look mean, and act a bit bossy, but you can see she has her heart at the right place, and she just wants to help out Victor), and the kid in the black robes, Artemis.

The art is pretty good, though the quality varied per page (and also per what kind of thing was it, was it comics, or an illustration, or a photograph). But I still liked it, the style fits perfectly with this series.

The book is just like all the others, it combines diary parts with comics and add some newspapers and other fun titbits in the mix.

I would highly recommend this book to everyone, and I do hope we will be getting more books in this series.