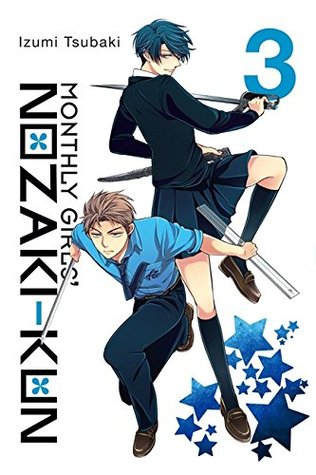 And I am already laughing hard when I read this manga, as it is just totally hilarious. But in this one I was laughing even harder. I also showed several pages to my boyfriend and he was in stitches as well.

I am also delighted to see some manga-only things. It has been some time since I watched the anime (when it aired), but I don’t remember several jokes that were in this volume. So we are finally getting closer to having some original stuff that the anime hasn’t touched. \o/ Don’t get me wrong, I am happy that the anime did such a good job, but it does make reading manga a bit boring.

I have several favourite scenes, but two of them would be when Seo and Wakamatsu go on a “date”, and the other when Nozaki had to learn to remember the seating places in his manga, and every time they tried to teach him he just drew exactly what was in front of his nose. He just couldn’t see his characters. 😛

I also still feel sorry for Sakura. That poor girl still likes Nozaki (though I really don’t get why with each passing volume), and he just doesn’t get the hint. Or thinks she is thinking something totally different. I just can’t imagine these 2 getting together.

I also love the other characters, though I have to say I just hate that blonde manga-editor. He is just so obnoxious. 😐

The art is really great, and I have the feeling it gets better with each volume.

What more? I think I said all I wanted, though I have one last thing left. I would highly recommend this one to everyone!