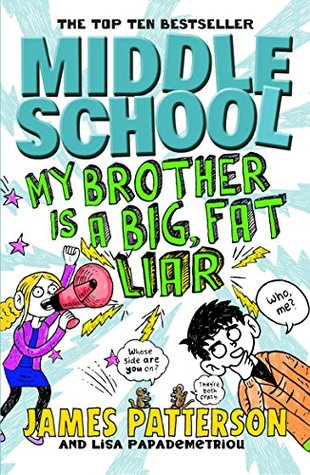 I recently bought (at Deventer boekenmarkt) Rafe’s camp book, and after that I wanted to continue with this series. Now I am home again from vacation I could finally do just that. I was curious about Georgia, so her book was the first one I bought.

And I am happy I did, though I have to say that I hated the school. Wow, so because someone in her family ruined things at school you will treat her like crap? That is just a no-no. She doesn’t even get a chance to explain, she doesn’t get a chance to show she isn’t as Rafe. Gee, great teaching right there. 😐 Really, I was just so pissed at the teachers and principal for acting the way they did. I know Rafe ruined a lot, Rafe destroyed a lot, but is that really professional to blame the sister as well and treat her like crap? No. Just no.

But even with the crappy school I really liked the book. The characters are fun, it was definitely fun to see Rafe again. Sure, he is a bit of a destructive force, but I did like him a lot. He doesn’t have a major role in this one, but we do see him quite a few times. Teasing his sister, doing his best at school (Gasp!), pranking people left and right, and much much more. He even showed some sweet moments (though he immediately went back to being normal Rafe again).

Of course my favourite was Georgia. I liked that girl. She wanted to show the world she was better than Rafe, and she did at times.
It was fun to see things happen from her POV as it gave more insight in the family, and also in Rafe.
We even find out something about her in this book. Wow, that must have been quite a shock for her, I can imagine how hard it would have been for the mom, and also for the grandma (even if she forgets everything it seems).
Plus it was quite fun to see her pave the way in school. To make happy memories. To make friends.
I did also feel sorry for her, that she had to take care of stuff at home. Don’t get me wrong, I am all for kids helping out in the house. But having her make sure her grandma doesn’t completely do stuff wrong, having to cook or else there is no food? Also the fact she didn’t really have anyone to talk to about the stuff that happened to school. Poor thing. 🙁 Luckily she is resourceful, and she will try her best to find out stuff herself.

The band was a fun addition, though I do think that Georgia really needs more lessons. Then again, the whole band could use that. 😛

The ending, the dance, the Battle of the Bands, it was all a delight, I was so happy for Georgia. And she also finally had a chance to be honest with her mom and tell her all that was bothering her! Yay!

But I have to remove 0.5 stars for the copy-pasting of a character from another series/show. Sorry, but Rhonda? She was just as Grenda from Gravity Falls. I recently watched that show, and I can say that while I know there are stereotypes for characters in every book, I never have seen a Grenda, and I do read quite a lot of books a year. Rhonda was just like Grenda. I am not sure if this was a tribute, or something else, but everything matched. Their names are almost the same. Rhonda is also a big girl. Rhonda shouts all the time (yes, I would say Grenda definitely shouts, she is quite loud). Both Rhonda and Grenda don’t get the word privacy. Both of them also don’t get the concept of no. I could go on, but I won’t. I just think it is a shame. 🙁 Instead of seeing Rhonda I just saw Grenda. 😐

All in all though, this was a really fun book, and I enjoyed it a lot. Guess I will be buying the other books soon because I want to see more Rafe and Georgia.