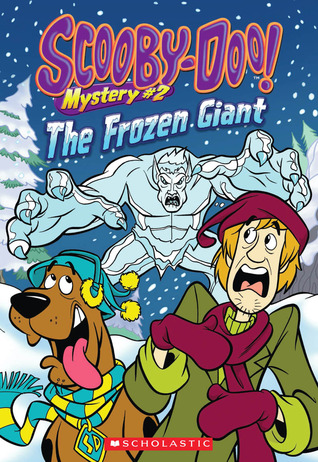 I am a huge fan of the Scooby-Doo franchise, I watched all the series, and also the movies. So when I found these books about Scooby-Doo, I knew I had to read them.

Their size (64 pages) is perfect for the story, everything is neatly wrapped up at the end, and it just feels like one has watched an episode of Scooby-Doo. I could just see them do all the things they normally do, see them solve the mystery, and then the big reveal of the whodunnit.

This time it is a Frozen Giant that is being a menace to the town, and I had at least 2 suspects. Was it the girl who was a bit too desperate to get people out because they might destroy the town’s nature? Or was it the guy who wanted to win the contest? Who will it be? They both have reasons and motives to be the Frozen Giant and create havoc.

The book also has illustrations and I really liked them, and they added something extra to the story, I think the story would be good without illustrations, but with them, you can solve the clues even easier.

The gang is all present, and they are all being the same as in the tv-series/movies.

However, while Scooby’s way of speaking isn’t that bad in the tv-series/movies, because you could still understand him, it was annoying and not always easily to deciphered in the book. At times I had to speak aloud to figure out what he was saying.

But all in all, this was one fun book, and I am happy I found out about it.