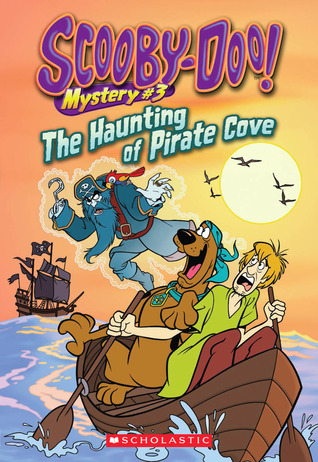 And the last book in this series, and I am so sad that it apparently didn’t continue any further than 3 books. 🙁

This book also was the least interesting from the 3 books. Mostly because it took ages for something exciting to happen, unlike the other books which immediately or quickly threw you in the mystery pit. And even the mystery was a bit boring. There is a treasure somewhere (or is there?) and there are stuff happening on the island where it is supposed to be.

Sure the whole pirate adventure cruise was fun, and I wish I could also be there for real, I would love it. Probably not want to leave. 😀

Luckily the book was quite short, so I just kept on going, also because I really wanted to know who was the culprit in the end. I had a few suspects, but almost everyone was being a suspect, so it wasn’t the easiest to figure out, especially when one is also a bit bored with the story.

And I will stick to what I said in all my other reviews about Scooby.

Also a bit of a shame of the cover, it made it seem like there was a ghost or something like that floating around all time, but he only made an appearance on the island, and only briefly (and then later with the chase scene and capture scene).

All in all, I did enjoy this series, and I do hope that one day there will be more books from the Scooby-Doo! Mystery series.