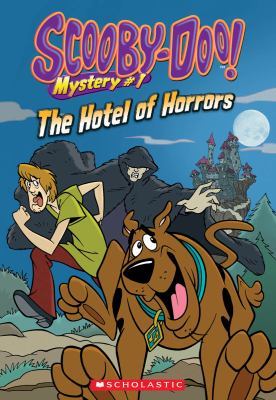 The second book for me, though it is officially the first in this series.

Due to my vacation starting soon, and I am quite busy with all sorts of things, I decided to not dive into a big, fat book (plus the fact that I barely have any books because all of them are in the vacation stack), instead opting for these fun, short, hilarious Scooby-Doo books.

In this one our gang goes to visit a family member, but they quickly get thrown in a mystery (of course, that always happens with our gang, no matter where they are, the mystery finds them) and it is up to them to solve it and find out the whodunnit.

The castle was delightfully creepy, and the mystery was a lot of fun. I had a few suspects, but just like our gang they fell off one by one due to various things. I do have to say I totally forgot about that character (because they only have such a short appearance), so the reveal was a nice surprise to me because in the end I didn’t know who it could be any more. 😀

Of course there is food, food and more food, and Scooby Snacks.

Like with the previous one, I could just see this one as an animation in my head while reading. I am guessing watching all those Scooby-Doo series and movies does that to someone. Plus being a giant fan of the franchise.

The only thing I didn’t like, and which was a problem with the previous one, and I am guessing the next one as well, is Scooby. In the series/movies he is still easily audible with what he says, however written? It just doesn’t work, and I have to say the words aloud to make sense of them at times.

But all in all, this was a really fun book and I enjoyed it a lot, I guess I will be reading the last one next. Hopefully there will be more books like this one day.