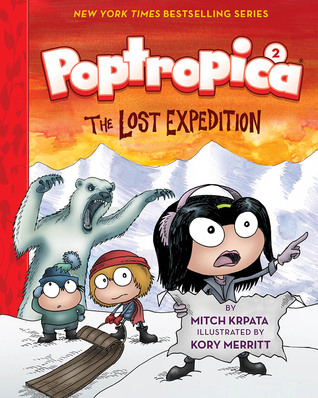 The long awaited (yes, I know it has only been 5 months, but that is a long time if you want a sequel) second book in this series is here! And I have to say that I enjoyed myself as much, if not more than the previous book.

We find out more about Poptropica, though I still have many, many questions about this place. But we do find out more, and also about the people with the tattoos. Of course not everything is revealed, but I do like how they are giving us glimpses behind the curtain of questions. 😛

The kids are still on the road to finding their way home, they are also still figuring out the map (that map sure has a will of its own), and in the meantime they also have to dodge, escape, and survive.

Mya is still my favourite character, if anything she is getting more awesome with each book. She was already kick-ass in the previous book, but she shows guts, bravery, strength even more in this book. I especially liked that one scene were she smacks a weapon out of a “villain’s” hands with a paddle while on a sled and going at high speed. Go girl go!

Jorge, who was my least favourite in the previous book, definitely went through a big improvement. He still did some annoying things, but I do have to say that I liked him more.

Octavian is still the villain, and he plays that role perfectly. He is creepy, scary, and doesn’t shy away from anything to get his hands on the map.

The twist at the end with who was the tattooed one on the ship? Well, I didn’t see it coming. That person was just so nice and friendly. Unlike some other characters on the ship.

The ending. Argh, that cliffhanger. It seems that this series loves doing that. I can’t wait for the next book, no clue when it is coming out, but I do hope soon as I am dying to see what will happen.

The art is really nice, I am now totally used to it (I needed a bit of an adjusting time in the first book).

I would highly recommend this book to everyone. Tropical adventures, an icy ship, hungry polar bears, and much much more!