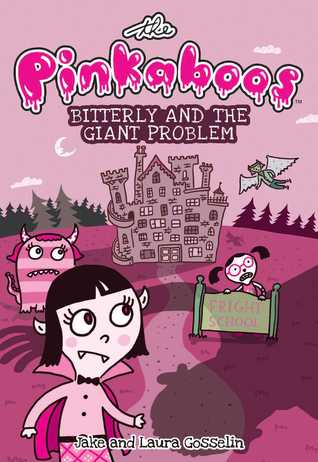 1.5 stars. I received this book from Netgalley in exchange of an honest review.

While I knew that this book would just flip around the idea of scary ghouls scaring people, instead they have to help defeat the fears their selected little girl has, it just didn’t sit right with me. It felt weird, and out of place as well. Throughout the book I kept hoping/waiting for a twist, but that never came. It is just that the girls will have to help out their girls in dreams. Which is kind of confusing, as they are afraid of something, but I don’t know about you, but if I was dreaming about a giant, and I would suddenly see a vampire? I would just run away from both. 😀

There is also the topic of bullying, which I didn’t entirely like, but I guess it did help out the characters finding their strength, finding a way to defend themselves against this. I still found it sad that those 3 girls were bullied and called pinkaboo’s. And that apparently none of the teachers, or none of the adults cared about it. Not that we saw many adults, but still. 😐

I just really struggled through the book, even if it was only 90 pages and I read through them quickly, I still kept looking at the page numbers.

Not only was it a bit bland, but it also felt like I missed an introduction book. We were just thrown into this world, I had no clue how powers work. Why frights are supposed to clear the fear of their girls, why frights can turn to nightmares (and why this can’t be reversed), and I had so many other questions. Some did get answered, but most didn’t.

I did like the added character profiles at the end of the book, it gave some more insight in the characters.

I really did like the illustrations, they fitted perfectly with the book.

But all in all, I am not sure I would recommend this one. It had some good moments, but also enough not so good moments.