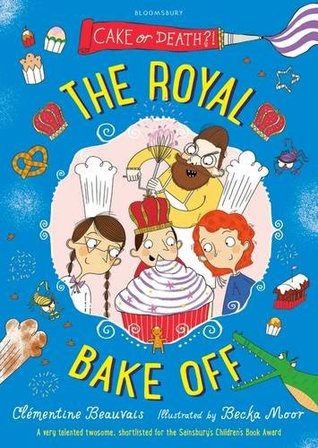 The third book in the Royal Babysitters series, and really this just gets better and better with each passing book.

Once again the girls (and of course Pepino) are still seeking for money. Yep, I do hope that one day they will have money for that amazing trip (and I wouldn’t mind coming with them if they would want to share their vacation). I do hope that when this series ends (not soon though, not soon at all) we will see the girls go on a well-deserved vacation. Until then they can keep on doing odd jobs here and there and have adventures left and right. It would be nice to put all their experiences on a CV, I am sure when they get older people wouldn’t mind having girls who can do all sorts of things. 😛

This time we have a giant bake-off + a lot of backstory on Pepino’s family (and I should say also other royal families). We learn about the king’s siblings (and the arguments between them, I did have a laugh at how fabulous the king’s brother looked in comparison to him or the sister). It was really interesting and it made the whole series even better. I was always a bit curious on how the king was chosen (sorry, those who read it will get it, but those who haven’t, well let me just say that he is an idiot and doesn’t really do a great job at manning the country).

The bake-off was just a delight. I do love cooking competitions, so you can imagine that I was excited to see such a competition in this series. Though I have to say that I felt sorry for those having to eat some of the cakes. Some were OK, but others….
And it wasn’t just cooking/baking, oh no, you also had competitions, dangers, quests, and a mystery (or even two) that needs to be solved!

I laughed so hard when they went around the world on an airplane powered by…. your own strength. But considering that there were only a few people on the plane this time they added hamsters. Hundreds of them. I just adore hamsters, and I just laughed so hard at the descriptions of the whole trip, every time they hit an airport they would switch hamsters, but in Australia that went a bit different, and Easter Island was even weirder. 😛

The ending was brilliant, I didn’t see it coming (with the princess), but it was definitely a delight. A lot was explained, a mystery was solved.

Of course you can imagine what happened to the girls and their money.

Like I said in my other reviews the illustrations are still fabulous and fit perfectly.
Though I did have one little thing that I found weird. In the previous book Holly loses parts of her hair, but in this one (which takes place just days after the events of the previous book) she has all her hair back again.

I also bought book 4 (when I found out there was one), and I can’t wait for that one to come in.

I would highly recommend this series to everyone.