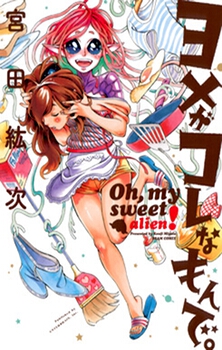 This is a review book 1 and book 2 (complete series, basing this one the fact the manga pretty much time-skipped at the end, plus the mangaka has died last year).

The book is about a human who married an alien. How that happened is explained later in the story, and I just laughed my butt off at it all. That is sure one way to ask someone to marry you. Maybe not the right time though. 😛

The manga begins at the point that they have been married for at least a year. On the one hand I was sad, because I would have loved to see more of the beginning. To see her adapt to a life on earth (I am sure it wasn’t easy), to see her get used to her outfits, to see them in their first stages of romance, to see their marriage. We do get some flashbacks to past stuff, but only very sparsely.

But I still loved it all though. You could clearly see that these 2 are just meant to be together. They are really cute, and I just love to see them together.
I loved how she tried her best to do everything in the household, but also loved how she tried to fit in/adapt to the lifestyle.

Quite quickly (chapter 3) we have a new addition to their family, a little baby. And thus the real fun starts as the little kid doesn’t get that he needs to hide certain things. He looks mostly human (unlike for example his mother) with the exception of his eyes and 2 parts in his hair. I laughed so much during their first outing and he kept using his 2 tentacles in his hair. 😛

There are some ecchi parts to the manga. For example our alien girl doesn’t really wear much in her alien-form, so you will see her boobs a lot. And when she goes in her human skin so she can go outside you will also see some nakedness.
While it was a bit distracted, and it bothered me at the beginning, I got used to it fairly soon. You just got so distracted by all the other things that you can’t even think of the fact she is butt-naked.

There are also a whole cast of other characters passing by. From the parents of both the characters, to new aliens that pop up and are, at first at least, a bit of a bother.

I also liked their trip to the alien world, from how the food at first looks disgusting but then is seemingly delicious, to how everything looks absolutely pretty.

The ending was lovely and I was happy for all the characters, though I do have to say it also felt a bit rushed. Suddenly the years just pass.

What more? Well I will just say to prepare yourself for laughing your butt off during a lot of scenes.
I would highly recommend this manga series to everyone.