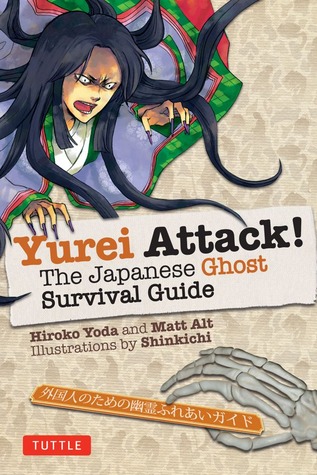 This sounded better than it actually was. It was still a nice book, still a fun book, but there were several things that I didn’t like.

First up the things I did like. I loved the female ghosts, the Games chapter, several parts of the Haunted Places chapter. I loved how each ghost got its own profile with all sorts of information on what threat level they were, what happened to them, when, and several other things. It was fun that they started with a small introduction and then dove into how it all came to this and what kind of attacks you can expect. At times there was also trivia (and I just love trivia).
The illustrations at the beginning of each new monster/game/etc. was lovely. Yes, I know they were gruesome, but I do love the drawing style. The artist sure captured the ghosts (and places) in a perfect way.

I thought this book would be only about Yurei, but instead it was about all kinds of things. From haunted places to games, to how hell is. It made the book more diverse and also more fun.

Now about stuff that I didn’t like.
First up the biggest one. Didn’t anyone do any editing on this one? There were numerous mistakes from how long something has passed (Like WWII ending 39 years ago in 1979, um no.), to several sentences that just got copy-pasted mere sentences after the first same sentence. Then there were errors in names (for instance a story about a girl who get cursed, instead of using the name of the girl who got cursed and got better thanks to the arrest of the girl who did the curse, they used the name of the girl who got arrested). I also don’t get why Houses with Histories is under Dangerous Games. I would say that fits better under Haunted Places. Same goes for Spirit Photography, that just isn’t a game. And so there were quite a few other parts that just had me scratching my head and wondering why no one checked this book before publishing it. The book loses 1 star for this.

This is more a personal preference, but I wished they had focused more on the female ghosts. The male ghosts stories often were boring, and I repeatedly had to stop myself from just dropping the book. Also for the Haunted Places I had hoped for a bit more diversity and seen some non-battle/non-war related thing. In the whole Houses with Histories part they mention there are enough creepy, unsettling houses, I am sure they could have featured some in the Haunted Places chapter.

So the book was pretty nice, and I did enjoy quite a few parts of the book, but sadly there was enough that I didn’t like, or that was just wrong (Editing anyone?). So I can’t give this book more than 3 stars.