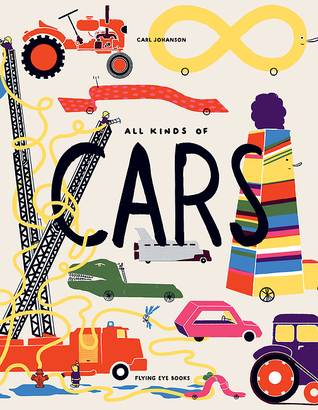 This was a fun book about imaginary and real cars! I love the art. Though I wish the backgrounds could have more colour, now it felt like a picture that was unfinished. 🙁

Yes, I know various sites say this one doesn’t come out until 2017, but believe me I got this one from Amazon and it is available at their site. It isn’t the first time a book has a wrong release date, but apparently no one cares to update it on the big sites like Amazon.

I knew I had to have this one, I already spotted some pictures up at Twitter, and so I was very eager to get this one. At first I was sad that it would take until 2017 to come out, but then apparently it got out already. I was delighted, yay, I could read it!

And I have to say the book was really fun, the cars are imaginary and also real. Of course it was quite easy to spot the imaginary cars (Stressed cars, poo cars, broken cars, guitar cars) since they had funny names and/or looked funny and not natural. 😛
There are also real cars and those are generally put together by category (for instance at the airport or mining).

I loved how the cars were designed (both real and imaginary), however I do have to withdraw half a star for the backgrounds. There were backgrounds but they just felt like someone forgot to colour them in, it was like a giant colouring page. It was just such a shame as it really had potential to be a wonderful scene.

Still I would definitely recommend this book to everyone. It is a fun trip through cars and I really enjoyed myself.