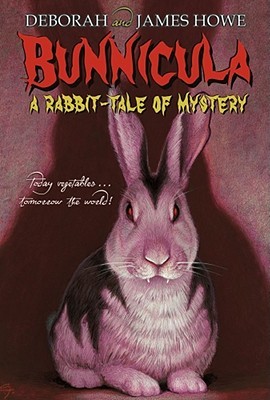 And boy, it was terrible. For various reasons. I was really looking forward to this one, a bunny? That is apparently a vampire or something? That sounds so much fun! Add to that the fact this book is from the POV of the pets (or at least the dog) and I was sold. I needed books for Banned Books Week and so this was an easy choice.

Sadly, it was not meant to be.

Chester: My Lord, I hate know-it-all characters, especially when they go around and flaunt with their “knowledge” and act like they are so superior, better, and more worthy of anything in life. Chester constantly kept on explaining stuff like he was talking to an idiot. It is not Harold’s fault he isn’t so knowledgeable, he just cares about other stuff in life, and that is OK.
Also his imagination, and how he acted was just frustrating as hell.
Also a cat who reads? Oh well, I guess it fits considering we have a vampire bunny, but it was a bit jarring, as I expected the bunny to be the only supernatural thing in this book, but then we get a cat who can read and apparently reads books at night, whut?
And frankly the whole OMG the bunny is evil, got annoying, and I just hated Chester for the way he hurt the bunny. Just because he is a vampire or whatever, doesn’t mean you have hurt him like that, did he ever hurt you? Or anyone else? No. Just vegetables.

Harold: He was pretty bland and boring. I don’t get why he is the main character. He is lazy, cares more about food than adventure, and he whined too much for me. Not that I would want Chester as a MC, but at least that would make sense. Now a big hunk of the stuff that happened was told to Harold by Chester. 😐

The constant arguments between Chester and Harold just hurt my head. Man, really, I know that cats and dogs don’t get along often, but wow.

Feeding dogs chocolate. If there is one thing I hate in children’s book, it is that. Kids are easily impressionable, and do you really want them to be told that feeding your pet chocolate is an okay thing? No, you don’t want that. Chocolate is POISON for dogs (and other pets). Why the hell would you freaking feed it chocolate? sighs And I get that this is an older book (seems it first came out somewhere in 1980), but I am sure back then they would know about chocolate and being poisonous. 😐

The bunny. Whoop whoop, so he does some stuff that we are being told by Chester, but seriously I wasn’t impressed. Ohhh, he sucks the juice/colour out of vegetables. How scary! shivers and laughs I found him growing more and more cute instead.

So yeah, not a good book for me, I am kind of glad I read it for this Banned Books Week and didn’t make it a Halloween read, because then I would have been even more disappointed.