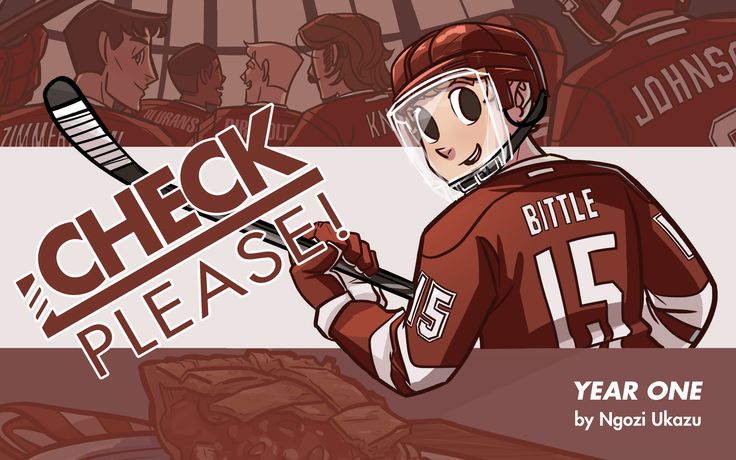 I spotted this comic being discussed on Twitter, and decided to check it out. Immediately I fell in love with the comic and I bought it directly when I found the store page.

I do hope that the artist will also make books/pdf’s of the other years, as this is just the first year of Bitty’s college/university time.

The book is all about hockey, about pies, lots more pies, about friendship, bros, vlogging, about living in a dorm, about being gay. I especially was curious about the whole gay x hockey part. I have read several books with sports and a gay character, and often it doesn’t turn out to be right. Often the person gets ignored, bullied, or worse. But not in this book, everyone seemed to be pretty much OK with him being gay, which was such a delight. Bitty’s reaction was so lovely, I can imagine that it might have taken a lot of curious to come out, and I hope he can be happy now.

The vlogging was also an interesting touch, and I loved to see Bitty’s vlogs, they were such a delight.

The hockey, the training, and all the explanation, and of course, most important, seeing Bitty grow was so much fun, and so realistic. When Bitty starts at the team he is mostly afraid, keeps fainting (like one of those fainting goats). But then later on, as the days and weeks pass by, you see him grow more confidence. You see him become more awesome with each training and every competition.

I am still not entirely sure about Jack. On the one hand he was a good character, and I definitely would ship him with Bitty. 😛 But on the other hand I didn’t always like his attitude. He was quite rude towards Bitty. Sure, I can imagine that it might hurt to hear people say such things about you, but no need to be so pissed off towards a team-member. That is just a no-no. I did like to see him (and his family) get a bit of backstory.

The art is also pretty great, it was one of the things I fell in love with when I saw the comic.

What more, ah yes, Holster, Ransom, Shitty (yes, that is his nickname) were all terrific characters and I really liked them all. They were kind, caring, friendly.

At the end of the book we some glossary with some terms. This is all done in a fun way and presented by Ransom and Holster. I just laughed so much during the time that they filmed Jack’s ass. 😛
Then we also have a sketches and were ideas came from part, I loved that this was added, it just gives more insight in the story and how it came together.

All in all, this is one book I would recommend. It is funny, it has pies, it has friendship, and hockey. It is 100% ‘swawesome!