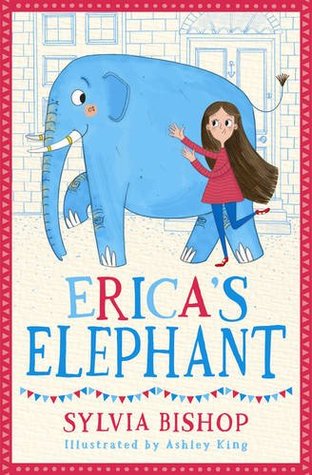 I already spotted this book several months ago, but I was still unsure about it. And then I saw the book in Dutch in the bookstore. I flipped through it, and fell in love. And then my sweet boyfriend bought the English book for me as a present (Thanks love!), and it arrived a few days ago.

This story is magnificent, so much fun, such a delight, a feast, and I laughed so much. There are good characters, there are baddies, an absent uncle, and then there is an elephant. You can imagine that having an elephant isn’t something easy, but Erica did her best when she found him on the doorstop as a present from her absent uncle. She didn’t have much money left, and elephants do need more food than humans ever do, but she found a way to make money by using the Elephant and his skills.

But that is not the place where this book ends, oh no. The book starts off all sweet (though I also have to say bitter, considering Erica’s situation, the fact she never went to school, that her uncle just left her), but then takes a turn when someone reports the elephant and stuff goes wrong.
I was quite frustrated with that Avis woman. My Lord woman, no reason to be such a doodoo-head about stuff. I hated how she treated the elephant, how she treated Erica.

The rollercoaster ride that happens after that was so much fun, though also exciting. Would Erica be able to keep her elephant? Or would she lose him? Would she be alone again?

My biggest surprise character would be Erica’s neighbour. I disliked the old bat at the beginning, but then I saw something different, and she quickly turned to be my favourite character. She was so sweet, but also so kick-ass. Even with her age she wasn’t about to let people just walk over her, oh no. I loved her ant collection, it definitely was an interesting addition to the character.

Erica’s situation was a bit weird for me + the fact of the elephant, so I tagged this one as octarine (magical). There is just no way that a kid can stay at home, alone, without going to school for 2 years. That is just not possible. There are laws, inspectors and much more. Plus that elephant just being able to pander around in the house without floors breaking, or stairs, it was just amazing.

But even with that happening, I still loved the nonsensicalness of it all.

The epilogue was definitely fun, and I am happy it was added. I do feel a bit sad that it ended like that, but I think it was better for all the characters in the end. Though I would have loved to see her meeting x again.

There are also illustrations all through the books, and I have to say that I like the style, it looks a bit simplistic, but still very pretty.

Would I recommend this book? Oh yes I would. It has everything that one would want in a book. Hilarious situations, elephants (who doesn’t love them), baddies that need to be defeated, a great, brave character. Lovely illustrations. Gee, what more would you like?