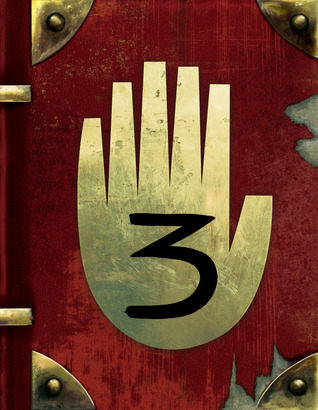 One of my most anticipated books in 2016 after I watched Gravity Falls and completely fell head over heels with the series.

This is the (in)famous Journal 3 which gets featured heavily in the series. Several pages are known to us (thanks to the series), but a whole lot of the book is brand-new, and full of adventure, full of codes and cryptic messages.

The book is split up in 3 parts. You have the part in which the Author talks and tells us about his experiments, about Gravity Falls, about his assistant, about his findings, and much much more. Then we go back to Dipper and Mabel. When they find the book and Dipper (but also sometimes Mabel) uses it as a journal to record the events that happen in the summer. And the 3rd part is all the author again as he has returned. We see through him how he is preparing the coming of Bill Cipher, he tells us about what happened in the dimensions, and then we get to the final battle with Bill and all that happens there. In both parts he also tells us about his life, about his family.

There are several revelations, and I was delighted to finally find out Dipper’s real name. We had some hints, and we already had suspicions, but finally it was told. I was squealing in delight that finally we knew his real name. Of course, I am not the one to spoil anything, so you will just have to find out yourself what his name is. 😛

The book is filled with cryptic messages, codes, and I had a lot of fun deciphering them. I bought a whole stack (or 2) of post-it notes, in the end I didn’t need that many, but I wanted to be prepared. I still have some codes to go, but I have most of them decoded. Some are just fun codes, but some really creeped me out.

It was so much fun to see the information about the monsters, and also see the notes from Mabel and Dipper to various things when they figured out what would help against x monster.

There is just one thing that I would like to have, Journal 1 and Journal 2. I want to know what is in those, what codes/cryptic messages are hidden in there!

Also, haha, I never noticed how many fingers the hand has on this book. It is a big hint to the author, and I am kind of amazed it never stood out for me.

I would recommend that people first see the series though, as this one pretty much tells everything that happens in the show. But after that? Go ahead and read this lovely book!