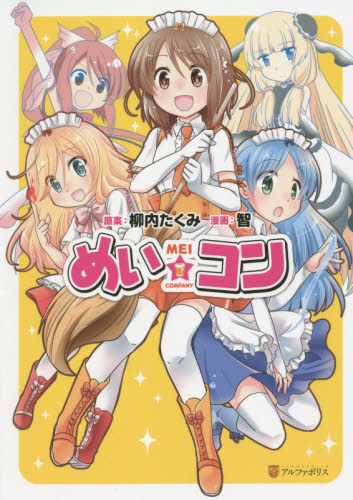 I spotted this one somewhere and I was intrigued by the idea. Ex-Mahou Shoujo who clean up the messes of newer generations, but also take on some normal cleaning jobs.

Because it was always a question for me, what happens when a magical girl stops being a magical girl. Some series seem to have magical girls way in adulthood, but several series have them stopped before they get adults.

In the case of the 3 main characters of this story they all were one group of magical girls, and then they defeated the boss and lost their powers. Resulting in them not getting anywhere, but failing left and right, barely getting through high school, but turning into NEETs. Luckily one of them had the great idea of starting a cleaning company: Mei Com or Mei Company.

I really liked the characters, they were fun, and I loved their friendship.

You would think the story has no plot, and is just about cleaning, but that is totally not the case. As the story continues we see our girls struggle with real life, we see the new magical girls (and learn something surprising about one of them), we see how the new girls got scouted, we see our main group clean everything, and in case of the boss of the company, well she gets pissy at all the destruction that the new girls are causing.

It was wonderful to see our girls try to get some structure and fun back into their lives. Finding something that fits them, something they can do for the world. I also loved seeing that they still had a bit of their powers left, even if it isn’t much, it does help with the cleaning.

Nearing the last few chapters we learn more about the enemy that is currently bugging the city, and our girls (and the magical girls) learn of a new skill that will definitely help out.

The manga is in a way connected to the series named GATE. This is a doujin manga from that world. I just love when a manga from a fictional world gets published in the real world. The same thing happened with Genshiken and Kujibiki Unbalance.

The art is also pretty decent, it reminds me a bit of some older manga.

Would I recommend this one? Yes. It is a short one but it has a complete story, and also a fun one at that. With great characters!