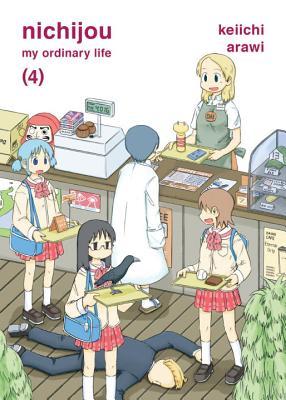 Nichijou is one of those manga series that I just look forward to.

It is also a series which has humour that is hit and miss. Some jokes work fine for me, some jokes just get old. For instance in this one I was just annoyed with the professor’s childish things. Yes, I know she is a child, but it seems she never does grow up. Instead she does the most stupid things, blames it on others, hurts people’s feelings, and in overall she is the least favourite of all my characters.

Luckily the rest of the volume was great. There are some recurring jokes, or things that go on through the whole volume. I love that. It makes the jokes even better because afterwards you can still laugh when you see, for instance, a crow, and then think back to what happened when those showed up. And of course there are just things that keep ongoing in every book, like Mio’s love for Sasahara (though I still can’t see why she likes him), or Yukko’s continued stupidity. 😛

This time we also had the science teacher going after Nano, and all the hilarity that ensues because of the stuff she tries to get Nano. This is then also followed by several sketches where 1 student gets into trouble (both times the same guy, poor fella), and another goes to find a teacher only to get x reaction about it.

I also saw several parts that I still recognised from the anime, and it was a lot of fun to see them again in this volume. Like the espresso, and how Yukko just got so confused at it all.

We have a big cast of characters and I always love to see each of them get a bit of the spotlight, even if it is only a small part.

The art is also still very fitting for this kind of manga. At times it is silly, at times it is detailed. You never know what you will get with Nichijou.

I have to give extra points to the cover, Nichijou sure does have funny covers which hint very closely to the content of the volume.

All in all, I can’t wait for the next volume to come out! And I would recommend this series (manga and anime) to everyone.