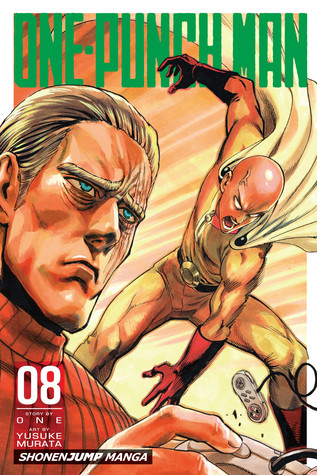 Finally the 8th volume was delivered and I could read it!

And boy, it was really exciting. We first start off with a bigger introduction to the King character, and I just laughed so hard at what we find out. Poor Saitama though, so that explains why he hasn’t been promoted. But Saitama also doesn’t seem to mind it that much, even giving advice to the guy.
I have to say the King character was an interesting one, though after this, I am not sure what to think of him. I kind of want to kick his butt for him not being honest. For him not even trying anything. 🙁 Then again, it does fit the manga. The manga is all about silly stuff, so having a character like this is perfect.

Then we have a battle, some more Genos stuff (yay, Genos), and a revelation that will probably cause some stuff to happen in the next volumes. New arc is coming!

The last quarter is bonus manga. First up we have a lost kitty. Plus a very angry kitty. I loved this story a whole lot.

The second is them eating Hot Pot at the dojo of Master Bang. Yes, this might sound boring, but it does connect to other stuff in the end + we have some epic battles.

All in all, this was an action-packed, fun, hilarious volume, and I can’t wait for the next one to come out.