First up, thanks to my boyfriend for giving me this one (and a few others) as a present! You are the best! 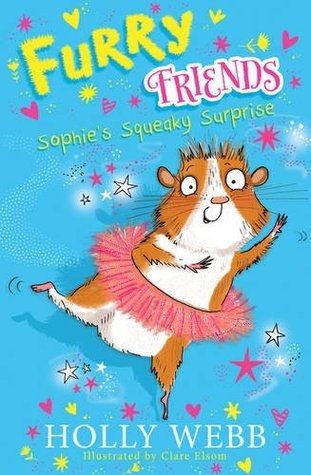 I spotted this book being promoted on Twitter and I was instantly curious. Guinea Pigs? Paris? Cute friendship? Illustrations? Um, yes, yes please!

The book is about Sophie, but also about Josephine. Sophie moved not that long ago to Paris with her parents and her brother, and she is just not happy yet. She misses her old home, her cat, her friends there, her grandma. Add to that the fact she is being bullied/teased by a girl at school. You can imagine that life might not be that much fun then. Until she meets a cute guinea pig named Josephine. Who wears a bright pink tutu. Who loves lavender macarons. Who lives under a big palace with her family. Oh, did I mention Josephine can talk? Well there you go.

This sounds magical, and it is. I was a bit worried about Josephine though, when we first met her, heard her description, I was worried she would be a bit too much (I have read some other guinea pig books), but instead she was a really sweet, cute, friendly guinea pig who loves her new friend and is willing to help her out.
Yes, Josephine is a real friend, and she helps Sophie with the problem at school (I won’t tell you what, how, or when). It was a delight to see her help Sophie.

I also liked the fact that Josephine and her friends lived under the palace and were helping it being tidy and neat. I had a snicker because of the hat she wears and also the others apparently have to wear (even if they don’t want to).

Sophie was a great character and I really liked her a lot from the start. I just wanted to hug her when we find out about the bullying. Poor thing. 🙁

There are also illustrations and they fitted right in with the story. They did remind me a bit of Becka Moor’s style of drawing.

All in all, I will definitely keep an eye out for this series as I want to know what the next adventure will be!