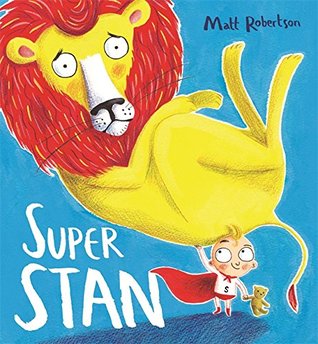 While I still enjoyed this one, it wasn’t what I had hoped it would be. I have had this one up on my shelves so long that it was before a blurb time. All I knew about the story was that it was about a superhero little dude, and I saw some illustrations.

However the story isn’t solely about the little dude, and the little dude was just way way way way annoying (yes, I know he is a baby/toddler, but come on, he was just way annoying, and I fear for the future). Instead it is about his brother who is feeling sad because he is under his brother’s shadow. I just felt so sorry for the guy. You see him try all sorts of things, just being nice, just being kind, but then his brother comes along and ruins everything by doing it 1000x better. 🙁 I just wanted to hug the guy, tell him it would be fine, tell him he would find something that he will be better at.

The ending was typical/cliché and I did think it was a shame it ended that way. Just like that stuff is solved? It was like no one truly cared about the bigger brother and just made it seem like his problems were easily solvable. 🙁 That is not how it works. 🙁

The art was definitely a wonderful thing and I loved them all. The artist has a great way of drawing, and I loved all the little details (for instance the park scene, it was quite fun to see what was happening there).

But all in all, I just can’t give this book more than 2.5 stars. Which is such a shame, I really was looking forward to this book, delighted when it got delivered, but oh so disappointed when I read it. 🙁