Mm, brains, um, sorry, I am for today’s WoW I got a book that I only recently found out about. It is the fourth book in the Newsflesh series. It is a series I only really read the first book and all the short stories of because of what happened in book 1 at the end and how it just didn’t turn out right in the second book.

Why do I want to read this book then? Well, this one apparently has a whole new cast, new story, and we might even get a few cameos from the team of the first books. And I did love this world that Mira Grant has created, a world where people learned (well, ok, fought to have some space for the human population) to live with zombies, and where some people have some zombie-ish traits. It was really interesting, so I can’t wait to dive back into that world. 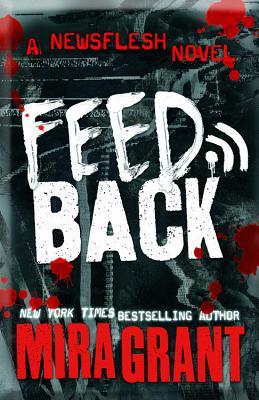 FEEDBACK is a full-length Newsflesh novel which overlaps the events of Feed and covers the Presidential campaign from the perspective of reporters covering the Democrats side of the story.
There are two sides to every story…

The year was 2014. We had cured cancer. We had beat the common cold. But in doing so we unleashed something horrifying and unstoppable. The infection spread leaving those afflicted with a single uncontrollable impulse: FEED.

Now, twenty years after the Rising, a team of scrappy underdog reporters relentlessly pursue the truth while competing against the superstar Masons, surrounded by the infected, and facing more insidious forces working in the shadows.