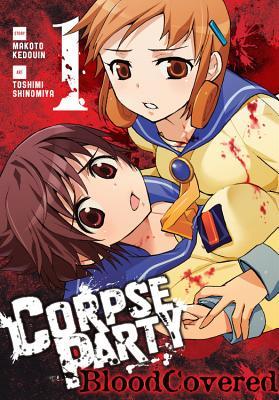 So this was as awesome as the games were. It pretty much followed the same story, but it was still great fun to see it in this form.

A little warning though, the same as the games, if you can’t handle gore, then don’t read this one. It is pretty much on par with Higurashi goreness. So be warned!

This release combines the first 2 volumes of the series, the same they did with Higurashi.

It starts off with our group of MCs doing horror stories while at school late, when they decide (with a teacher) to do a game. Stuff happens, and quickly they find themselves in horror-festival. Welcome to Tenjin Elementary School. A school full of death, horror, blood, pain. The characters are split up, either alone, or in groups.

I don’t know what I would rather have, experiencing the horror with my friends, or being alone. I think considering the games the school is playing, I would rather be alone. I still remember what happens in the games, and at times it is just better to be alone. To not be so scared that you will cause your friends grief, or to be possessed (as that can also happen) and hurt your friends. On the one hand, I can also imagine having a friend might help out. You are both going through the same thing. And two heads is better than one.

The first couple is Naomi and Seiko. They are best friends, though Seiko wishes there would be more between them. She is constantly drooling over Naomi, while Naomi is not seeing Seiko as more than just a good friend. She has a boyfriend (who is also somewhere, in some dimension, in this school). I still remember Naomi’s and Seiko’s parts in the game, it was heartbreaking, and it was the same feeling I had with the manga. I won’t spoil anything, but dear lord. 🙁 My heart broke all over again.

As the girls make their way through the school we see them find all sorts of hints to where they are, and what happened here. There are also various corpses, spirits, and tricks that the school keeps playing on them (the random earthquakes).
You never know what is creeping up on you in this school. You won’t be safe anywhere. And you can really feel that feeling while reading.

The last part of the volume is about another group. The teacher, and 2 others from the class. However most of the last part is all about the teacher and what happens to her. 🙁 I guess in the next volume we will see the other 2 again, or maybe other kids.

What more? Mm, well I can’t wait to see how the story will go on, and to see if there are some differences between this and the game (of course there are as the game features many choices that can change a few things here and there).

The art is amazing, and I really liked it. The artist is also able to capture the expressions of horror, fear, and terror perfectly right.

I will definitely buy Volume 2 of this soon as I want to read it further.