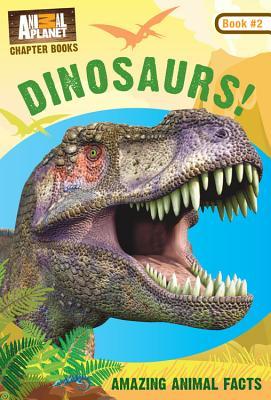 I was really squealing and flailing when I saw I was accepted for this one. I love anything to do with dinosaurs and so I was delighted that I had a chance to read and review this one.

But I do have to say that after reading this I am a bit disappointed. I expected more illustrations/art (dinosaurs/other critters from that era) or photographs (from skeletons/dig sites), but instead it was mostly a wall of text. Then there was the fact that some stuff got rehashed (for instance on one page you would have a small image with a subtext under it, and that would get rehashed in the wall of text that followed 1 or more pages later.

Luckily there are some illustrations/photographs, so there was a bit of a break in all the text. I definitely liked how those things were styled, it looked really nice.

I also love the colourful border around the text (with in the corner a lizard and plants).

I still have to laugh about the fact that quite a few of the dinosaurs these days look like freaking chickens. I kind of miss the old dinosaurs without all the feathers and wings stuff.

The text is easily read, with quite a few explanations here and there for some of the words.

I loved how it began with the beginning and then ended with the destruction of the dinosaurs.

I do have to say it was a shame there was no mention of international museums.

But all in all, I enjoyed this book a lot, and I would recommend it.