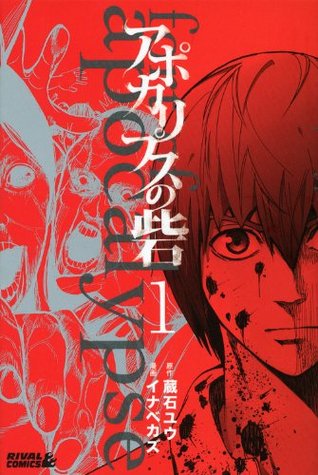 This is a review for the first 5 volumes, which is 50% of this series. I will try to keep it as spoiler-free as I can, but I do want to discuss stuff that happened in this manga.

So like with everything, the series starts off pretty normal. Well, as normal as you can get it when you are in a juvenile prison. 😐 But well, you get my drift. Then suddenly something happens, and poop really hits the fan. Our main group quickly finds out what happened and try to stop people from doing stupid things (like opening windows when someone is knocking on it, and we can clearly see they are zombies). Of course, this is a zombie apocalypse so people aren’t always the smartest cookies, so you can imagine what happens.

And it isn’t safe outside the gates either, with dead roaming everywhere. Pushing up against the giant gate (poor guys who got eaten when they opened it).
Our guys also find that out when they decide to check out the MC’s family (who is apparently not living that far away).

The series goes from creepy, to creepier, to wtf, NOPE. >.<

Really, if you thought flesh-eating zombies is bad, or even prisoners who get a bit ticked off at every slight little thing, well imagine now a guy (they call him the Bokor) who can control the monsters. Who can make sure that they will make a big giant bridge of dead and zombies. Who is sitting on top of them like a freaking king. 😐 Yeah, have fun escaping that. Did I mention that he can regenerate? Heal? Or that he has super-sonic screaming powers that will not only speed up the zombies and make them freaking ninjas, but also will shatter your eardrums? Isn’t that lovely? Yeah, I know, nope, nope and triple nope.

Of course there is also a fair share of human stupidity (as is common in zombie apocalypse). Like the guy who keeps his dead kid in the hopes he can be healed from being a zombie. Or the guys who think it is a good idea to just go into a jail and do crap to someone who is clearly not a good person.

And then when you think, yay, a girl (because you won’t see one (at least not alive)), you find out certain stuff about her and then you would rather have her not in the manga. She belongs to something that we see often in zombie apocalypses. You always have people like that in zombie movies/books/manga. Maybe you guys already know what is up.

We have 4 characters, but one true MC. I did like all the characters, though at times they were a bit too creepy, or violent for me. We also do find out a lot about them. I loved that the writer did this, as it gives more depth to the guys and you will definitely root for them. I felt so sorry for Maeda, and how he got put in the jail. 🙁 But I guess we will find out why he got put there (there are hints, and I have my suspicions on why no one is believing him).

The zombies are terrifying, the mangaka truly is able to draw a horrific monster. The zombie parts (people getting eaten, or zombies getting up and close and personal) were creepy as hell. Really.
There is also a lot of gore, so be warned about that. If you can’t handle chopsticks inserted into eyes, or zombies heads getting ripped off, or other gruesome things, then don’t read this one. My stomach was already not approving much of all of this at times.

All in all, I did think this manga is pretty great. I was looking for a creepy zombie manga, and not a cutesy, moe moe manga, and I found it. It is too bad that there are only 5 volumes left, and that they are all out. But then again, that is also a blessing as I can just read on and find out what happens to the characters, and if the world will get better.

I would recommend it if you need a creepy manga with lots of zombies. It is after all the right season for it, with Halloween right around the corner.