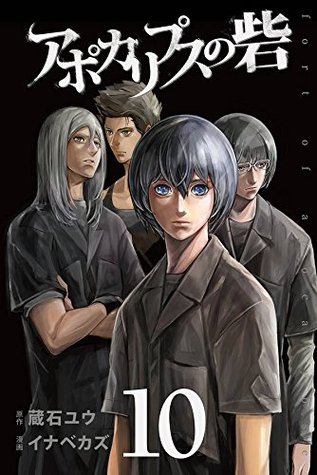 I had some time today, so I decided that I would just keep on reading this series. It was engaging, exciting, creepy, and perfect for this season of Halloween! Plus I really wanted to know what would happen to the world. Would there be a cure? Who will live, and who will die of our group?

It was a pretty good ride in the end, but I do have to say that some parts were just weird, Twilight Zone-ish, and also rushed. The whole 2 bokors merging and forming something like that? No, nope, nope, nope! And it felt just weird, like the author felt like they needed to make something exciting as the manga was almost over, and then just decided to do something like this.

I was also terribly sad that that had to happen to that character. 🙁 I know, I shouldn’t get too attached to the group, it is a zombie apocalypse and everyone can die. Either by zombies, or by humans. But it was still a bit of a shock to see that person go.

Rikkun, the kid zombie, was a bit weird. I mean, I can understand you would want to keep him, but um, yeah. And then later with the whole bokor stuff it just felt out of place even more. I guess at least he had his use, and I was quite happy with what happened with him at the ending.

Maeda also goes bokor (no spoiler as it was already shown in volume 5, and it is pretty clear from the beginning of volume 6). Though not as much as the other bokors. Then again, if we have to believe that doctor (and we could) I guess it will take some time before someone goes full bokor. Before someone loses all reason (plus all their humanity).

The volumes also feature a heavy dose of backstory on our characters. I was delighted that the author made time for that, as it made you more invested in the characters. I felt sorry for all the characters though, I still don’t agree with what they did to end up in juvie, but really, they had some horrible pasts. Especially Iwakura’s backstory, we already saw several parts in the previous manga volumes, but dear Lord. That poor guy. 🙁

There was still a flood of gore and lots of zombie action. It was quite disturbing to see zombies being turned into seals and other animals. Evolution is a scary thing in the zombie apocalypse.

The ending? Well, I did like it. But it was rushed as hell. It felt like the author needed to hurry and you really noticed that. There are still enough questions left, and while there are 3 extra story chapters, including one showing a world that is slowly getting better, there are still too many questions.

Still, this was an interesting ride, and I would recommend it. Of course, if you can’t handle gore or violence…. then stay away from this one.