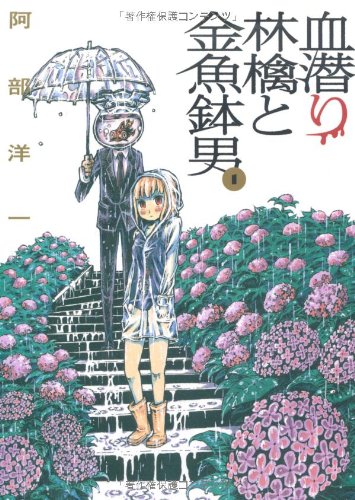 This was all sorts of awesomeness.

I first found the sequel (which I didn’t know was the sequel), and started reading it. I quickly scrolled to the comments, and found out there was prequel series. Then I started reading that, and well, I couldn’t stop until I had read all of the volumes (3 of them). Now I just eagerly want to read the sequel, which I am hoping to do soon.

Everyone knows vampires. They suck your blood, they are evil, and no they don’t glitter (sorry guys). The vampire in this one works in a different way. He is called the Fishbowl-man. He pops up at large bodies of water, or when it is raining/just rained. As the name implies, he is wearing a fishbowl instead of a head. And instead of biting you, he sends a fish out of his bowl to suck/get in your blood, from inside of you. Oh yes, you will have a lovely big hole in your neck, and a lovely little fish popping into you to suck you dry. Lovely isn’t it? Instead of turning into something like a vampire, or dying, you change in a goldfish if the fish inside you manages to drink your blood and release the toxins.

This sounds positively delightful no? Ah, and generally he tends to be drawn to blood (or the smell thereof). And yes, he is creepy as hell. Really. He can even pop into your car if your car is wet enough. Fuel for nightmares anyone? Yep. 😐

Luckily there are people who can help, if they are fast enough they can save you from a goldfish forever fate (however there are still trying to figure out if they can also return people back to human, there have been stories of people who can do that). These people are called blood divers. They generally wander around in bathing suits (which yes, does get them arrested at times), and need a gun to aim at the wound so they can go into your body and defeat the evil goldfish inside. The way the goldfish are defeated is by scooping them up in a poi, and hope that the poi doesn’t rip when catching the goldfish. I loved the idea of this, it might be a bit unhandy but it is a fun detail. If you don’t know what a poi is, then be sure to search it. The game it is used for is a popular one in Japan during festivals.
They also use Ramunu, and those little balloon-thingies you can buy at Japanese festivals.

Our MC is faced with such a blood diver and decides to help her out. He is a better swimmer than she is (yes, she is a blood diver but she sucks at swimming). I really liked the guy, he really did try to help Ringo out, and he is cheering her up when she is down (as it is a difficult job).

Ringo was a fun character, and I was delighted she got better with each time she had to battle. That she learned to make use of objects since she can’t swim that well. She is brave, she values her friends and will do anything to protect them. She is a sweet girl. Though she still has much to learn.

As the story continues we meet more people, friends, but also enemies. I can’t wait to see what the Fishbowl man really is. And why he is like this. Why does he want to turn people into goldfish?

I also liked the sub-plot about the MC’s sister. It was interesting, though also heartbreaking.

Out of all the characters Anzu-senpai was my favourite. I mean, really, this woman is married (though her partner and no one around her knows about her being an ex-blood diver), and the first time we spot her she is blood diving with her baby on her back, and she still kicked some serious goldfish butt. Yes, this girl will battle. I felt sad for her that she had to feel ashamed to be a blood diver, but I was delighted with how things went for her. Yay!

The last volume brought a new character, one I didn’t like, and probably won’t like for a long time. A girl named Suika. Who can create her own holes in people. She is the only one who can do that, but she has been abusing this power, turning people into watermelon-people (Yes, nice pun there, no?), and being a general poo-head to everything around her. I could understand her feelings, but I still think she doesn’t have to be such a poopoo about everything and everyone. 🙁

I am sad that the magazine in which this one was featured was discontinued, which spelled the end for this first series. I am glad that the author managed to continue with a new series though. Yay!

The only thing I wasn’t that impressed with was the art. It is a bit so-so, not that good, but thankfully also not terribly. It felt a bit rushed at times. Which is a shame.

But all in all, this is a perfect Halloween series, creepy, spooky, but also hilarious and fun. Definitely would recommend it!