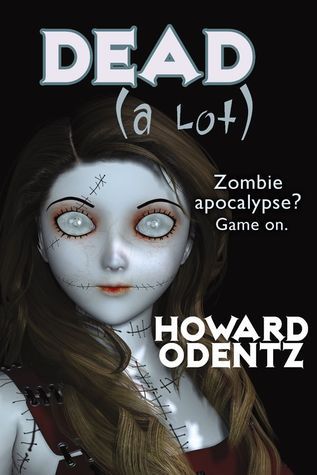 This was totally amazing! I loved each and every part of it!

I spotted the second book up on Netgalley, well, rather, I saw a book that looked awesome, and thought I would check it out, only to find out it was book 2. So I went to search for book 1 and fell in love. I had to have it.

The zombies in this one maybe a bit different from most zombies (given it is parasites, bullets can’t kill them, people aren’t technically dead (at least from what I remember)), but they are zombies all right. They have a craving for meat (though they don’t care if it is human or a cow), a bite will turn you into one, and various other things. I do have to say I found them slightly more creepy than normally, especially since the whole gun thing isn’t working, you have to torch them. And you just have to hope you have paper, or fire with you in case you are stuck in a horde.

Our main character is Tripp, who at times is a bit of an annoying boy who makes some harsh comments, however, even with that, he changed quite a bit. And you could also see he was smarter than the comments made him seem. Often it seemed that he saying them more because he was insecure and just blurted out stuff in the heat of the moment.
I grew to really like Tripp, he was brave, he tried to protect those he loved, and I could see how frustrated he was with the fact he couldn’t do everything at times. How he felt like he failed if something happened. I just wanted to pat him on his head and tell him it would be OK.

Then we also have Trina, Tripp’s twin sister. She was definitely a fun character, and I loved how scary she was at times. Especially when someone crossed her, oh boy, you don’t want to be in her path. 😛
I didn’t like how fast she replaced Chuck though. I know it is the zombie apocalypse, but if you are that far in your relationship with someone you don’t just replace them within days. 😐 That is not cool, not nice. And yes, it is the zombie apocalypse, but I just got a bit pissed at her for doing that. It felt disrespectful to Chuck.

Prianka, well it took a bit of time to like her. She just acted so superior at times and it just annoyed me. But later… I really liked the girl and saw the real Prianka. And she was a great girl, who deeply cared for her little brother.

Sanjay, I am not entirely sure what to make of him. The autism wasn’t the problem, it was pretty well described/written. I am not sure how to explain what was the problem. He did get better later on, and I laughed when he went all occult-mode and scared the crap out of people. 😛

Jimmy, well I am still not sure what to think of him. At times he was really cool, but at times I was annoyed with how he acted. Yes, we get that you want to do everything, we get that you can probably do a lot, but again, you are still slightly a liability. I am sorry if this sounds harsh, but really, while others might just run if they fall, if he falls, or if something happens to his wheelchair he is just out. And that might cause others to come to danger. And in a zombie-eats-everything-land this is just not good. 🙁
I also didn’t appreciate how he was just flirting with the girls.

We also meet some other characters, and they were a bit of a hit-and-miss for me.

The story was definitely creepy as hell, and also exciting. How our team grows, how they fight hordes of zombies, how they find out that sometimes zombies might not be the worst thing in the world.

There were also enough moments that just made me burst out in laughing. I love it when a zombie book combines comedy with horror. You are still creeped out, but at times you have a reprieve by something hilarious.

All in all, I will definitely need to find book 2 as I want to know how things continue. I would also recommend this book to everyone.