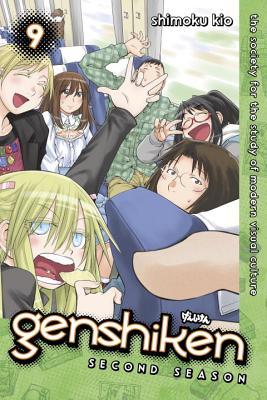 Yay! Finally the new volume of Genshiken Nidaime is out! \o/

This time we have more drama, more Madarame harem (yep, he still can’t choose, and this is to the frustration of several characters), Kuchiki’s graduation trip (yes, finally this guy is graduating, finally his final essay is done). There are boobs (poor Madarame, poor Kuchiki), and we also have our English girl present (so you can just imagine the chaos she will bring).

I also loved how no one wanted to come with Kuchiki’s trip, until he mentioned that it could also be seen as him leaving, and suddenly everyone wanted to come. 😛 Poor Kuchiki, but then again he brought it on himself with being a pervert, weirdo, and strange dude who totally knows no social cues.

Then we also have Hato and Yajima’s manga. It was quite fun that the Genshiken is focusing on manga again, they can finally do something more in their club than just cosplay or normal activities.

There is also a very hilarious scene (well two actually) with Sue and Madarame.

The trip, and where it led them, was so much fun. Especially since we saw Yajima’s family (and now it is clear why she looks like that, dang genetics). The mom was just hilarious though. My Lord, I felt sorry for Yajima for her mom. Especially during the part where she just bluntly said something to the already dead Kikuchi. No, I won’t tell you what it is. You will have to read it.

I am a bit sad that the older Genshiken crew is slowly graduating, but I guess it is inevitable. It is only wondering how long Ohno-senpai, or Ogiue, or even Sue, will still be around. Ohno is still working on her final stuff, and I guess Ogiue is starting with that soon as well. I am not entirely sure if I will continue reading the manga if those characters leave. Yes, we still have cameos (a lot by Madarame), but those are just too rare, and I miss those characters. I do love the new characters, but not as much as I do the older ones.

I also love how the art is getting better, and to see the author bring in various fun memes and draw all sort of anime/manga/game references.

All in all, this was a good volume, though I really hope the whole Madarame x all the girls (and one boy) will be over soon. Pick one already! Or none of them.